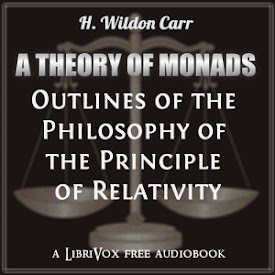 A Theory of Monads: Outlines of the Philosophy of the Principle of Relativity

Since the publication of this book, a little more than a year ago, the interest in Einstein and the principle of relativity has very greatly increased. There are now a large number of popular expositions, and the theory itself has undergone some notable advances in its philosophical, mathematical and physical application. In pure philosophy Lord Haldane's Reign of Relativity has applied it to the direct interpretation of the theory of knowledge. In mathematical physics the important work of Hermann Weyl, Space-Time-Matter, is an advance even on Einstein, and applies the principle not only to the geometry of masses, but to that of intermolecular movements, and to electro-magnetic phenomena generally, thus making it embrace the physical world in its entirety.

The main purpose of this book is to show the historical relations of the new principle to the old philosophical problems and to the classical theories of space and time. I have, with the exception of a few important emendations, left the historical chapters unaltered, but I have added a new chapter on "Einstein's Theory" in order to show more clearly than the original work did the nature of the revolution which it effects in scientific method and in the concept of physical reality. - Summary by Preface (12 hr 54 min)

The Concept of Nature in Physical Science

The Concept of Nature in Philosophy

The Idea of God

The Moment of Experience

Memory: The Fundamental Fact in Experience

The Diversity in Union of Body and Mind, part 1

The Diversity in Union of Body and Mind, part 2

The Mechanism of Psycho-Physical Activity

The A Priori Synthesis

The Principle of Relativity