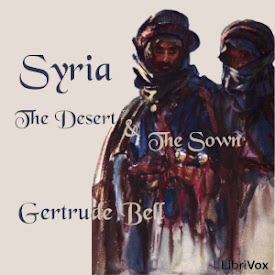 Syria: the Desert and the Sown

Gertrude Bell's Syria: The Desert and the Sown describes her travels in the Levant (also called Greater Syria) during the first years of the 20th century. In this vivid and painstakingly documented narrative, Bell recounts her visits to Damascus, Jerusalem, Beirut, Antioch and Alexandretta, as well as the time she spent in the deserts of the region. Fluent in Arabic and several other languages, Bell brings to her account a level of insight beyond the reach of an average travel writer. She would later go on to play a highly influential role in the politics of the Middle East, drawing on the knowledge and personal connections she built up during these and other travels. The text is accompanied by numerous photographs taken by the author. (Summary by Kazbek) (8 hr 47 min)