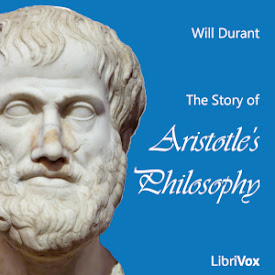 The Story of Aristotle's Philosophy

This little Blue Book No. 39, by Will Durant, deals with Aristotle (384-322 B.C.E.), a Macedonian pupil of Plato, who became the teacher of Prince Alexander. While his pupil went off to conquer the world, Aristotle returned to Athens and founded his school, the Lyceum. There he amassed the first great collection of plants and animals and laid the foundations of biology, logic, literary theory, ethics, and political science. Departing from abstract Platonic universals, Aristotle described such natural processes as the developing embryo of the chick. He saw the universe as matter in motion with God as its first impulsive force. Aristotle was skeptical of Utopias. Social evils do not "arise out of the possession of private property," he wrote, but "from quite another source--the wickedness of human nature." At the theater he said we enjoy tragedies which elicit pity and terror, but in everyday life Aristotle counseled balance, reason, dignity and the golden mean in all things. (Pamela Nagami, M.D.) (2 hr 6 min)

A Word to the Reader

Ch. 2: The Work of Aristotle

Ch. 3: The Foundation of Logic

Ch. 4: The Organization of Science

Ch. 5: Metaphysics and the Nature of God

Ch. 6: Psychology and the Nature of Art

Ch. 7: Ethics and the Nature of Happiness

amazing bring back philosophy in our school s & colleges