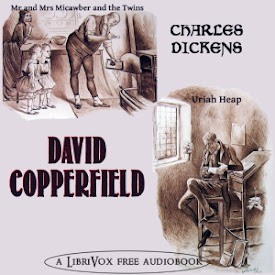 David Copperfield, like all of Dickens' novels, is filled with many memorable characters (because they are hyperbolic representations of character types) from all members of society. Here we have, for example, the virtuous, but relatively poor, Mr. Peggotty beside the grasping and greedy and vengeful and more middle-class Heep, but also beside Julia Mills whose only desire is also for money, which she possesses to excess (alluding to the capitalistic aggrandizement of European exploitation of foreign nations). And David Copperfield, like other of Dickens' works, emphasizes thematically that love and sacrifice are better than greed and arrogance. But this novel is more autobiographical than his others (obviously the title is an indication, Charles Dickens (C D) becomes David Copperfield (D C), and, of course, David becomes a famous writer, in fact, known worldwide, like Charles Dickens. Finally, it should be mentioned that David Copperfield probably more than in any of his other novels emphasizes the power and joy of family, and part of that is his exposure as evil all that and those that would subvert it.- Summary by Jim Locke (33 hr 13 min)

I Have a Change

I Fall Into Disgrace

I am Sent Away

I Enlarge my Circle of Aquaintance

My First Half at Salem house

My Holidays Especially one Happy Aternoon

I Have a Memorable Birthday

I Become Neglected, and am Provided For

The Sequel of my Resolution

My Aunt Makes up her Mind about Me

I Make Another Beginning

I Am a New Boy in More Senses than One

I Look about Me and Make a Discovery

Some Old Scenes, and Some New People

I Corroborate Mr. Dick, and Choose a Profession

I Fall into Captivity

I Visit Steerforth at His Home, Again

The Beginning of a Long Journey

My Aunt Astonishes Me

A Dissolution of Partnership

I Am Involved in Mystery

The Beginning of a Longer Journey

I Assist at an Explosion

The New Wound, and the Old

I Am Shown Two Interesting Penitents

A Light Shines on My Way

Great book but narrative is somewhat off.