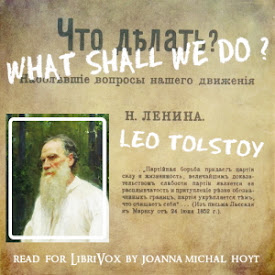 What Shall We Do?

A vivid description of wealth and poverty in Russia in Tolstoy's day, an inquiry into the root causes of economic inequality, and a vision of a more just way of living.

Tolstoy recounts his own disturbing encounters with extreme poverty in Moscow, his initial idea of making the problem disappear by generous financial contributions, and his subsequent realization that the problem of poverty was much more intractable than he had imagined. He concludes that poverty is fundamentally linked with the luxurious lifestyle to which he and his class were accustomed, and that both are detrimental both to the rich and to the poor. He goes on to investigate the roots of power imbalances, both in the state and in markets, and to make suggestions for a fundamental social and economic reform in the interest of justice and well-being. Both his social critique and his proposed reforms are grounded in a deeply held and somewhat unorthodox religious faith, as well as in a vigorously applied but somewhat unconventional view of science.

Unfortunately he also expresses some views on the role and duties of women and the use of birth control which some readers may find offensive. This material is mostly contained in Chapter 40, the last chapter. (Summary by Joanna Michal Hoyt) (11 hr 0 min)

As always Tolstoy has the creative gift to touch my soul.