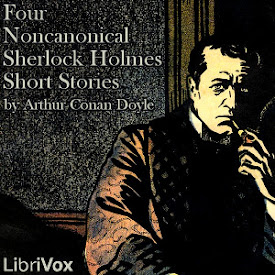 Although the Sherlock Holmes canon traditionally consists of four novels and 56 short stories written by Arthur Conan Doyle, there are many Sherlock Holmes stories outside the canon. Most of these noncanonical stories were written by authors other than Doyle, but there are four short stories about Holmes written by Doyle that are nonetheless excluded from the canon, for various reasons. This LibriVox album consists of these four noncanonical stories. The first story, "The Field Bazaar", was first published in 1896 in a special issue of a University of Edinburgh student newspaper called The Student. Doyle wrote this very brief story to support a fundraising event at the university, his alma mater, but most scholars consider the story to be a parody and therefore not part of the canon. The second and third stories, "The Lost Special" and "The Man with the Watches", were both published in The Strand Magazine in 1898 and both feature mysteries involving trains. These two stories are not part of the canon because neither story mentions Holmes by name, although literary scholars have proposed that the unnamed "amateur reasoner" in "The Lost Special" and the unnamed "well-known criminal investigator" in "The Man with the Watches" are intended to be Holmes, and this theory is accepted for the purposes of this LibriVox album. Doyle wrote the fourth story, "How Watson Learned the Trick", for a miniature book that was placed in Queen Mary's Dolls' House, a dollhouse built for Queen Mary in the 1920s that housed a tiny library featuring works by several famous authors of the day, the contents of which were published in 1924 for public consumption. Considered a companion piece to "The Field Bazaar" due to both stories consisting entirely of conversations between Holmes and Watson over breakfast, "How Watson Learned the Trick" is similarly excluded from the canon on the grounds of being a parody. - Summary by David Purdy

Story 3: The Man with the Watches