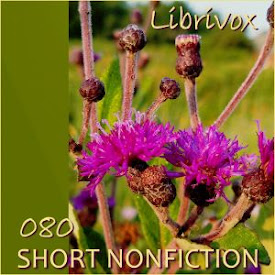 Twenty short nonfiction works chosen by the readers. "Not one of us actually thinks for himself, or in any orderly and scientific manner. The pressure of environment, of mass ideas, of the socialized intelligence... is too enormous to be withstood." (H. L. Mencken, 1919) The individual and society were central to several vol. 080 reads: The Genealogy of Etiquette; A Lounge on the Lawn; Alexander Pushkin; Princess Zizianoff; The Hanseatic League; and The Limits of Atheism. Science and the inventive mind were covered in "On the Science of Experiments; Coffey's Science of Logic; Medicine and It's Subjects; How a Fast Train is Run; and The Telephone. Travel and customs were explored in Rupert Brooke & Skyros; Lundy Island; and An Unfamiliar Naples. Nature studies included Wildflowers of the Farm; Birds in the Calendar; Trees in Landscape Painting, and A Tame Rook. Finally, a dog's life received favorable comparison with our own in The Superior Animal. Summary by Sue Anderson

The authorship of Lundy Island, originally ascribed to Anonymous has been determined through genealogical research to be Amelia Ann Heaven, a member of the family which owned the island from 1834 to 1918. https://en.wikipedia.org/wiki/Lundy

Birds in the Calendar, June, Voices of the Night

Flowers of the Farm, Introduction

The Genealogy of Etiquette

How a Fast Train is Run

The Limits of Atheism, Or, Why Should Sceptics Be Outlaws?

A Lounge On the Lawn

The Telephone, From Invention to Business