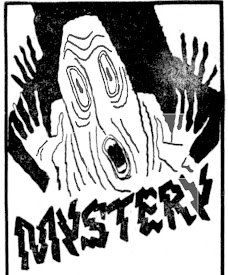 "Mystery Theatre" was a CBC radio series that featured dramatizations of mystery, detective and supernatural stories and science fiction.  A Perfectly Happy Life by Ted Ferguson. As we all know, after one year of wedded bliss, something's bound to go terribly wrong (and we mean terribly wrong). Sight Unseen by Dorothy Davis  The eerie tale of another couple having trouble with a house they just bought. "Sight Unseen". Doublestrip by Otto Lowy A story of foreign intrigue. A strange interlude when an aging British agent, John Gray, receives an assignment in Belgrade, Yugoslavia. The cast: Edward Greenhalgh as Gray Terre;nce Kelly and Eva Theren Producing company: CBU (Radio station : Vancouver, B.C Producer: Don Mowatt, Canadian Broadcasting Corporation The Kitchen Table  by Alan King.  A couple moves into a new house, a strange man wanders in on a stormy day and an inquiry into an unsolved pioneer crime begins. The Duel by Alexandre Dumas.  The story starts off innocently enough with a couple of guys having a few drinks. But, as we all know, sometimes things turn ugly. One man challenges another to a duel and his adversary chooses the weapons. It's not a question of who wins or looses, it's a question of who's too smart for his own good. The Monkey's Paw by W.W. Jacobs.   Someone is given a magical monkey's paw that grants wishes. When that person makes a wish, the wish comes true but at a cost to the wisher. For example, you may wish to bring someone back from the dead. With all that time lying in its grave, what sort of shape do you think the corpse will be in? Hmmm? The Signal Man by Charles Dickens,  A tale of being mown down. Remember, please remember, not to take those voices in your head too seriously. The Tell Tale-Heart by Edgar Allan Poe.  A frightening story of a troubled man's conscience driving him insane. Dr. Heidegger's Experiment by Nathaniel Hawthorne  A magic potion that brings back youth to three old friends. They toss it back and, as one might expect, the scene turns ugly. But how long will the spell last? Mr. Higginbottom's Catastrophe by Nathaniel Hawthorne  How damning false rumors can be, and even more so after the fact. The Strange History of David Swann by Nathaniel Hawthorne  A moralistic narrative that states, "Fortune doesn't smile on those who sleep." The Cable Car Incident by Frederick Spoerly  Two friends are caught in a cable car. They believe that one must jump to save the other... or is someone just pulling their legs? The Hitch Hiker by Alan King  The classic story of a dead man seeking revenge from beyond the grave. Be warned - and be careful who you run over! Starring John Vernon. The Mines of Falun by E.T. A. Hoffman Temporal Fortunes of a. Romantic Myth of Time. If, as George Poulet tells us, the great "discovery" of the eighteenth century was memory, The Adventure of the Noble Bachelor  by Sir Arthur Conan Doyle,

The Adventures Of the Noble Bachelor

The Mines Of Falun

The Strange History Of David Swann