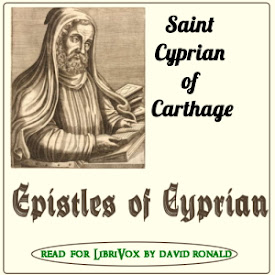 Little is known of the early history of Thascius Cyprian (born probably about 200 A.D.) until the period of his intimacy with the Carthaginian presbyter Cæcilius, which led to his conversion A.D. 246. That he was born of respectable parentage, and highly educated for the profession of a rhetorician, is all that can be said with any degree of certainty. At his baptism he assumed the name of his friend Cæcilius, and devoted him self, with all the energies of an ardent and vigorous mind, to the study and practice of Christianity. His ordination and his elevation to the episcopate rapidly followed his conversion. With some resistance on his own part, and not without great objections on the part of older presbyters, who saw themselves superseded by his promotion, the popular urgency constrained him to accept the office of bishop of Carthage [A.D. 248], which he held until his martyrdom [A.D. 258]. The writings of Cyprian, apart from their intrinsic worth, have a very considerable historical interest and value, as illustrating the social and religious feelings and usages that then prevailed among the members of the Christian community. Nothing can enable us more vividly to realize the intense convictions-the high-strained enthusiasm which formed the common level of the Christian experience, than does the indignation with which the prelate denounces the evasions of those who dared not confess, the lapses of those who shrank from martyrdom. Living in the atmosphere of persecution, and often in the immediate presence of a lingering death, the professors of Christianity were nerved up to a wonderful contempt of suffering and of worldly enjoyment, and saw every event that occurred around them in the glow of their excited imagination; so that many circumstances were sincerely believed and honestly recorded, which will not be for a moment received as true by the calm and critical reader. The account given by Cyprian in his treatise on the Lapsed may serve as an illustration, p. 368, vol. i. Of this Dean Milman observes: "In what a high wrought state of enthusiasm must men have been, who could relate and believe such statements as miraculous!" -Summary by Robert Ernest Wallis. As with all historical texts, the language used in this volume should be interpreted within the context of the entire work and the cultural context of its publication. - David Ronald (13 hr 58 min)

The Life and Passion of Cyprian, Bishop and Martyr by Pontius the Deacon

To the Carthaginian clergy from the clergy of Rome, about Cyprian's retirement …

To the presbyters and deacons abiding at Rome [AD 250]

To the presbyters and deacons of Carthage [AD 250]

To Rogatianus the presbyter, and the other confessors [AD 250]

To the clergy, concerning prayer to God [AD 250]

To the Martyrs and confessors [AD 250]

To the clergy, concerning granting peace to the lapsed prematurely, without the…

To the clergy, concerning the lapsed and catechumens, that they should not be l…

To the clergy, concerning those who were in haste to receive peace [AD 250]

To the presbyters and deacons assembled at Rome [AD 250]

To Moyses and Maximus, and the rest of the confessors [AD 250]

The confessors to Cyprian [AD 250]

To the clergy at Rome, concerning the confessors, and the forwardness of Lucian…

To the clergy, on the letters sent to Rome; and about the appointment of Saturu…

Moyses, Maximus, Nicostratus, and the other confessors, in reply [AD 250]

To the presbyters and deacons [AD 250]

To the presbyters and deacons abiding at Rome [AD 250]

The presbyters and deacons abiding at Rome to Cyprian [AD 250]

To the Carthaginian clergy, about the letters sent to Rome and received thence …

To the clergy, concerning the case of the poor and strangers [AD 250]

To the clergy, bidding them show every kindness to the confessors in prison [AD…

To Caldonius, Herculanus, and others, about the Excommunication of Felicissimus…

Caldonius, Herculanus, and others, on the Excommunication of Felicissimus with …

To the people, concerning five schismatic presbyters of the faction of Feliciss…

To Cornelius on his refusal to receive Novatian's ordination [AD 251]

To Cornelius about Cyprian's approval of his ordination, and concerning Felicis…

To the Roman confessors, urging their return to unity [AD 251]

Cyprian to Cornelius, congratulating him on the return of the confessors from s…

Cornelius to Cyprian, concerning the faction of Novatian with his party [AD 251]

Cyprian's answer to Cornelius concerning the crimes of Novatus [AD 251]

Cyprian to the confessors, congratulating them on their return from schism [AD …

To Antonianus about Cornelius and Novatian [AD 252]

To Cornelius, concerning granting peace to the lapsed [AD 252]

To Cornelius, concerning Fortunatus and Felicissimus, or against the heretics […

To the people of Thibaris, exhorting to martyrdom [AD 252]

To Cornelius in exile, concerning his confession [AD 252]

To Lucius, bishop of Rome, returned from banishment [AD 252]

To Euchratius about an actor [probably AD 249]

To Rogatianus, concerning the deacon who contended against the bishop [AD 249 o…

To the clergy and people at Furni, about Victor, who had made the presbyter Fau…

To Pope Stephanus, concerning Marcion of Arles, who had joined himself to Novat…

To the clergy and people abiding in Spain, concerning Basilides and Martial [AD…

To Florentius Pupianus, on calumniators [AD 254]

To Januarius and other Numidian bishops on baptizing heretics [AD 255]

To Quintus, concerning the baptism of heretics [AD 255]

To Jubaianus, concerning the baptism of heretics [AD 256]

To Pompey, against the epistle of Stephen about the baptism of heretics [AD 256]

Firmilian, bishop of Caesarea in Cappadocia, to Cyprian, against the letter of …

To Magnus on baptizing the Novatians, and those who obtain grace on a sick-bed …

Cyprian to Nemesianus, and other martyrs in the mines [AD 257]

Reply of Nemesianus and others to Cyprian [AD 257]

To his clergy and people, concerning his retirement a little before his martyrd…