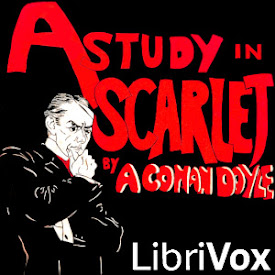 Arthur Conan Doyle’s novel A Study in Scarlet marked the first appearance of fictional private detective Sherlock Holmes and his assistant, Dr. Watson. Doyle wrote this novel in less than three weeks when he was 27 years old. Originally called A Tangled Skein, the novel was rejected by several publishers before it was accepted for publication as A Study in Scarlet in the November 1887 issue of Beeton’s Christmas Annual, an obscure British magazine remembered for little other than its inauguration of Sherlock Holmes. The novel was first published as a book the following year, but it was not until Doyle’s publication of the Sherlock Holmes short story “A Scandal in Bohemia” in The Strand Magazine in 1891 that the character of Sherlock Holmes received widespread acclaim. Since then, A Study in Scarlet has been published in many editions both in English and in translation, and allusions to the novel have frequently appeared in the works of other authors. A Study in Scarlet has occasionally generated controversy relating to the negative depiction of early Mormons in the chapters that take place in Utah. When visiting Utah for the first time in 1923, Doyle was asked to apologize for this depiction, but he defended the relevant content in the novel as historical. Like other installments in the Sherlock Holmes franchise, A Study in Scarlet has been adapted many times for a variety of media, including comics, radio, television, film, and the stage. The first two film adaptations, one British and one American, were released in 1914 and both are now considered lost films; in 2010, the British Film Institute named the British film one of the 75 most wanted films for their National Archive. The novel’s enduring legacy is also discernable in the widespread use of magnifying glasses in detective fiction, a trope initiated by A Study in Scarlet. - Summary by David Purdy

Our Advertisement Brings a Visitor

Light in the Darkness

On the Great Alkali Plain

John Ferrier Talks with the Prophet

A Flight for Life

A Continuation of the Reminiscences of John Watson, M.D.