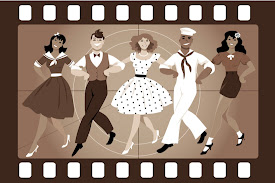 01 Hollywood musicals: The 30’s and 40’s. It’s easy to forget that the very first talkie, “The Jazz Singer” of 1927 with Al Jolson, featured music. Since then, Hollywood turned musical films into high art, with Fred Astaire and Ginger Rogers kicking off one dance craze after another, MGM’s dazzling technicolor productions and the catchy tunes of Irving Berlin and George Gershwin. Among the many fascinating anecdotes, we hear about the rise and fall of the talented Judy Garland and how Gene Kelly went singin’ in the rain all the way to stardom. Producer: Pete Myers Broadcast: September 6, 1991 Radio Netherlands 02 Hollywood musicals: The 50’s and 60’s After Judy Garland left MGM, Warner Brothers jumped into the breach with their new freckle-faced star Doris Day in “Calamity Jane”, co-starring the great Howard Keel. The mid-50’s saw the birth of rock and roll and the first pop musicals, but many of the greatest traditional musicals of all times were filmed during this era: “The King and I”, “High Society”, “Gigi”, “West Side Story”, “My Fair Lady”, Mary Poppins” and “The Sound of Music”. Then came the success of television and videos, and the golden age of musicals appeared to be coming to an end, but not without a grand finale to the 60’s with Barbra Streisand in “Funny Girl”. Producer: Pete Myers Broadcast: 13 September 13, 1991 Radio Netherlands 03 The ghost singers behind the stars Many of the stars had gorgeous voices but they could not sing. This is the story of a few of the greatest ghost singers who dubbed the actors and actresses in Hollywood musicals. Even her greatest fans in India were hardly even aware that singer Lata Mangeshkar existed, although her voice featured in two thousand Bollywood films. In this programme, we hear more about the ghosts behind the scenes in Hollywood: Marni Nixon and Dorothy Dandridge, to name just two. Producer: Pete Myers Broadcast: September 20, 1991 Radio Netherlands 04 Musical biographies Though not strictly limited to the format of the musical, films about music itself and about the lives and passions of musicians and musical performers are a favourite subject of cinema. Composers like Johann Strauss, Schubert and Mozart are the heroes of many a motion picture. Mario Lanza played Enrico Caruso, Barbra Streisand played Fanny Brice, and movies have been made of the lives of Billie Holiday, Edith Piaf and Janis Joplin. And then there is Gertrude Lawrence and Ruth Etting. Who? Find out more. Producer: Pete Myers Broadcast: September 27, 1991 Radio Netherlands

03 The ghost singers behind the stars