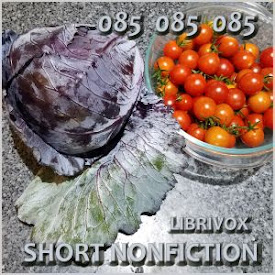 "A regard for decency, even at the cost of success, is but the regard for one's own dignity" was novelist Joseph Conrad's take on fame, a quote from the preface to his autobiography A Personal Record (1912). Other lives chosen by readers to examine in vol. 085 include the Borgias; the Cynocephali; Hermann von Helmholtz; Edgar Allan Poe; John Burroughs; a pre-Revolutionary War magnate named Browne, who built a mansion on the ridge of a hill; women as a social class; and an 1821 rabies victim named Thomas, who exhibited hydrophobia. Political history receives scrutiny in Some Materials and a Possibility; The House Famine; Cracow; The Dutch East India Company; and Across Africa by Air and Rail. The art of Japanning illuminates an ancient craft. Literature, by Irvin Cobb, is welcome humor. And for hungry souls, there are recipes for ice cream and for Army chow! Summary by Sue Anderson. (6 hr 17 min)

John Burroughs' Memories of His Boyhood

The Cynocephali (From The Library of Photius)

Recipes Used in the Cooking Schools, U. S. Army

Some Materials and a Possibility