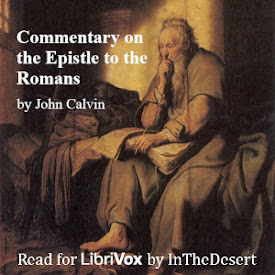 A Commentary on the Epistle to the Romans

Of all commentators I believe John Calvin to be the most candid...He was no trimmer and pruner of texts. He gave their meaning as far as he knew it. His honest intention was to translate the Hebrew and the Greek originals as accurately as he possibly could, and then to give the meaning which would naturally be conveyed by such Greek and Hebrew words: he laboured, in fact, to declare, not his own mind upon the Spirit's words, but the mind of the Spirit as couched in those words. Dr. King very truly says of him, "No writer ever dealt more fairly and honestly by the Word of God. He is scrupulously careful to let it speak for itself, and to guard against every tendency of his own mind to put upon it a questionable meaning for the sake of establishing some doctrine which he feels to be important, or some theory which he is anxious to uphold. This is one of his prime excellencies. He will not maintain any doctrine, however orthodox and essential, by a text of Scripture which to him appears of doubtful application, or of inadequate force...whether we agree in his conclusion or not, [he] cannot fail to produce the conviction that he is at least an honest commentator, and will not make any passage of Scripture speak more or less than, according to his view, its divine Author intended it to speak." Excerpted from "Commenting and commentaries" by Charles Spurgeon, 1876 - Summary by InTheDesert (15 hr 26 min)