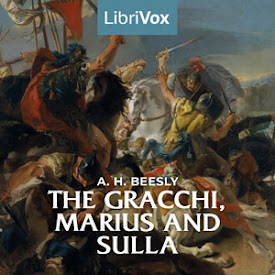 The Gracchi, Marius and Sulla

During the last half of the second century B.C. Rome was undisputed mistress of the civilized western world. As the British historian, Augustus Henry Beesly writes, "a brilliant period of foreign conquest had succeeded the 300 years in which she had overcome her neighbors and made herself supreme in Italy. In 146 B.C. she had given the death-blow to her greatest rival, Carthage, and had annexed Greece." But Rome was on the brink of a one hundred year-long revolution. In this slim volume Beesley, recounts the careers of four of its first dynamic leaders: the idealistic Brothers Gracchi, who attempted land reforms, and the rough, resourceful soldier, Marius, who overhauled the army. The book closes with ruthless, charismatic Sulla who, gaining the allegiance of the Roman legions, in 82 B.C. seized the capitol and after a vengeful purge, tried by reactionary measures to turn back the tide of social change. - Summary by Pamela Nagami (7 hr 6 min)

Ch. 5: The Cimbri and Teutones

Ch. 14: The Personal Rule and Death of Sulla