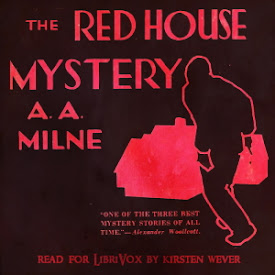 Author A. A. Milne is best known to the world as the creator of Winnie-the-Pooh. Yet Milne was versatile, having written dozens of plays, humorous articles, books and – The Red House Mystery. In which…

Mark Ablett is the massively narcissistic owner of The Red House, a beautiful English country mansion. The estate is managed mostly by Mark’s side-kick and younger cousin, Cayley. As a wealthy artiste, Mark has chosen his handful of guests both to pander to his self-image and to allow him near-total control of virtually all aspects of his luxurious country house “show,” as it were.

In the novel’s first eight hours, Milne presents a literary tour-de-force: first, the unexpected arrival (after 15 years’ absence) of Robert, Mark’s n'ere-do-well brother from Australia; second, Robert’s murder; and third, Mark’s own disappearance. Enter Antony Gillingham, our brilliant but modest gentleman sleuth. He arrives on a passing visit to his young friend Bill, one of Mark’s house guests, who later becomes the faithful “Watson” to Antony’s Holmes. Follows the juxtaposition of three distinct theories of the crime (or perhaps, given Mark’s disappearance, crimes) as put forward by Antony, by Mark’s confidant, Cayley, and by local police Inspector Birch. It is of course Antony, with Bill’s help, who solves this this delightful and extremely well-crafted mystery. - Summary by Kirsten Wever (7 hr 12 min)

Chapter 2 - Mr. Gillingham Gets Out at the Wrong Station

Chapter 3 - Two Men and a Body

Chapter 4 - The Brother from Australia

Chapter 6 - Outside Or Inside?

Chapter 7 - Portrait of a Gentleman

Chapter 9 - Possibilities of a Croquet Set

Chapter 16 - Getting Ready for the Night