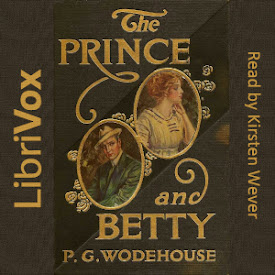 The Prince and Betty (version 2)

The story moves from a royal palace in Europe to a squalid tenement in New York. The European action centers on the efforts of an uncouth millionaire to create a gambling mecca on the tiny isle of Mervo. This involves the installation of a Prince who is unknown to the populace, a royal decree allowing gambling, and a proposed royal marriage spectacular enough to create the publicity to draw business. But the millionaire’s proposed bride – his stepdaughter, Betty – has a history with Prince John, which ignites stormy emotions and sends her flying to New York.

In New York we meet Rupert Smith – in fact, the double of the aristocratic, optimistic, erudite, pseudo-Socialist Rupert Psmith (with a silent preliminary “P”) who is featured in four other Wodehouse novels, including Psmith, Journalist. Bored with the dull content of the small weekly paper he edits, Smith develops an exciting and provocative organ which involves its staff (including Betty and, later, John) in precarious adventures. Articles about deplorable tenement conditions threaten certain parties who commission a gang to put Smith et al. out of commission. To protect themselves as they investigate, they enlist the aid the leader of New York’s most powerful gang. As the truth comes to light everyone is surprised by how intimately the Mervo and New York story lines have been linked all the while. - Summary by Kirsten Wever (8 hr 59 min)

Chapter 1 – A Cable From Mervo

Chapter 2 – Mervo And Its Owner

Chapter 5 – Mr. Scobell Has Another Idea

Chapter 8 – An Ultimatum From The Throne

Chapter 11 – A Letter Of Introduction

Chapter 16 – Two Visitors To The Office

Chapter 21 – Changes In The Staff

Chapter 22 – A Gathering Of Cat Specialists

Chapter 23 – The Retirement Of Smith