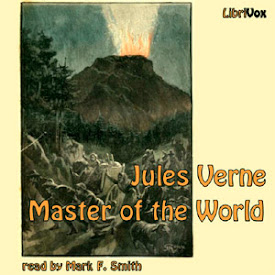 The Master of the World

Chief Inspector Strock gets the tough cases. When a volcano suddenly appears to threaten mountain towns of North Carolina amid the non-volcanic Blue Ridge Mountains, Strock is posted to determine the danger. When an automobile race in Wisconsin is interrupted by the unexpected appearance of a vehicle traveling at multiples of the top speed of the entrants, Strock is consulted. When an odd-shaped boat is sighted moving at impossible speeds off the New England coast, Stock and his boss begin to wonder if the incidents are related. And when Strock gets a hand-lettered note warning him to abandon his investigation, on pain of death, he is intrigued rather than deterred.

Set in a period when gasoline engines were in their infancy and automobiles were rare, and when even Chief Inspectors had to engage a carriage and horses to move about, the appearance of a vehicle that can move at astounding speeds on land, on water - and as later revealed, underwater and through the air - marks a technological advance far beyond the reach of nations. It is technology invented by and for the sole benefit of a man who styles himself (with some justification) "The Master of the World."

This book is a sequel to an earlier Verne novel, "Robur the Conqueror", but enough detail is given to fully appreciate this story without having first read the other. (Summary by Mark) (4 hr 54 min)

What Happened in the Mountains

A Meeting of the Automobile Club

Along the Shores of New England

On Board the Terror

In the Name of the Law

An interesting story, read by one of your master readers, Mark Smith. It is unfortunate that "Robur The Conqueror" is not available.

My humble opinion of this genius writer

The Master of the Worldâ; we can detect a tired master story teller trying his best to hold the imagination of the reader, but by getting vague, repetitive and at times by being dull in his narrative, failing to connect with the reader. This could have been a thrilling story if it was written at the peak of his physical health, but âThe Master of the Worldâ in my humble opinion is not a story that will make any impact with a non-Verne fan. Even for a Verne devotee like me it was not an entirely satisfying experience as the story was not at all going any where for the major part of the book.

I do like Jules Verne's writing style, and I always enjoy listening to Mr. Smith. However, I think that the plot of this story was not entirely to my particular liking. I did enjoy hearing about parts of the eastern United States in this time period. I didn't like how many times phenomenons were attributed to the devil, instead of more logical things. As for the end, it would have been nice to hear a little more about what Strock's life was like after his adventures. Oh well. All told, this was an edge-of-your-seat, mysterious book.

Nice novel of its time so very well read by Mark Smith. My only negative observation is that the ending was a tad weak and could have been better resolved to tie up a few loose ends. That said...this was a good novel when taken as a whole.

Outstanding narration by Mr Smith. Is there any way I may be able to obtain a list of the books narrated by Mr Smith? My name is Joseph G Krestan and my email address is jgkrestanjr@outlook.com.

Mark Smith is an excellent reader - but it feels like verne cut the book short. Wish the plot had been a tad more developed