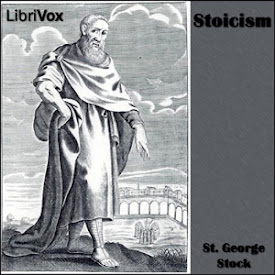 This short book is part of the Philosophies Ancient and Modern series, which attempts to make Western philosophy more accessible to the general public.

In this volume, George Stock provides a concise primer on Stoicism, the ancient philosophy that maintained that the universe is governed entirely by fate, and that humans can achieve happiness only by cultivating a calm acceptance of the vicissitudes of life. Among the Stoics of the Greek and Roman world were its founder, Zeno, the former slave Epictetus, and the Roman emperor Marcus Aurelius. George Stock discusses not only the Stoic ethics, but also less well-known aspects of Stoicism, such as its division of the branches of philosophy, its account of logic, and its natural philosophy.
(Summary by Leon Mire) (2 hr 15 min)

Foreword / Chapter I - Philosophy Among the Greeks and Romans

To Be and not to See!

Excellent presentation of the core values of the adherent.

Enjoyed Listening to This.

The person reading this made it possible to learn a new sibject. The book is good for anyone who is looking for a critique of stoicism.