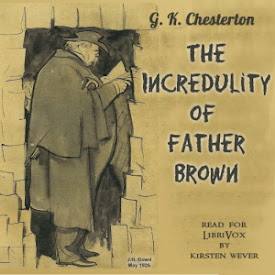 The Incredulity of Father Brown (Version 2)

Father Brown is a nondescript, shy, poorly clad and clumsy Catholic priest – and an exceptionally talented detective. He shines not despite, but because he is a humble, quiet, commonplace, Catholic priest. Because of his personal attributes he is frequently underrated and even ignored by professionals, by those with higher status or less reticent personalities. Yet he surpasses them all by his habit of observing and making rational sense of the ordinary, by what is, to most people, the unseen. He does not neglect science and experimentation, but he draws heavily on the habit of introspection and on the psychological insights he has gained by working with the poor, the underclass, and by hearing their confessions and witnessing both true penitence and true evil.

He turns upside-down the approach of Sherlock Holmes, which focuses on the facts that allow for theoretical deductions. His detective methods mirror his personality, as his intuition transforms commonplace, apparently unimportant facts into ordinary, prosaic explanations that explain otherwise baffling mysteries.
- Summary by Kirsten Wever (8 hr 52 min)

Chapter 1 - The Resurrection of Father Brown

Chapter 2 - The Arrow of Heaven

Chapter 3 - The Oracle of the Dog

Chapter 4 - The Miracle of the Moon Crescent

Chapter 5 - The Curse of the Golden Cross

Chapter 6 - The Dagger With Wings

Chapter 7 - The Doom of the Darnaways

Chapter 8 - The Ghost of Gideon Wise