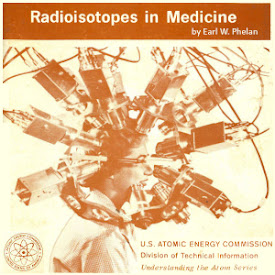 This is a book in the "Understanding the Atom Series" from the Division of Technical Information, U. S. Atomic Energy Commission. The author gives a short overview of the field and outlines the diagnostic and therapeutic uses of radioisotopes in medicine with examples of application. The book gives an accurate historical view of the state of medical radiotherapy in 1966. - Summary by Larry Wilson (1 hr 36 min)

Radiation was first discovered by old cis gendered white people. It is impossible to divorce the taint of phallogocentric oppression from from any ancillary good nuclear medicine might do to people. Demand nuclear medicine be banned. Demand Alpha, beta and gamma radiation be renamed to something more inclusive, such and Hip Hop balls, Queer smarties, and indigenous whizzes. Only by renaming radiation particles can we make science inclusive and diverse. We need to stop trying to power the world with raycyst nuclear energy and instead power our world with love and inclusion stories such as that of Madam Curie are extremely problematic. Rather than being a voice for women's rights. we need to look at her choices through the lense of modern feminist theory. Madam curie was very much younger than her chosen cis gendered oppressor aka husband. The fact that she chose to marry this oppressor to gain access to his lab instead of killing this evil white male means she is complicit in the oppression