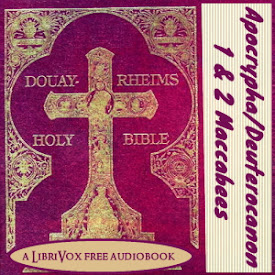 These books are so called, because they contain the history of the people of God under the command of Judas Machabeus and his brethren: and he, as some will have it, was surnamed Machabeus, from carrying in his ensigns, or standards, those words of Exodus 15.11, Who is like to thee among the strong, O Lord: in which the initial letters, in the Hebrew, are M. C. B. E. I. It is not known who is the author of these books. But as to their authority, though they are not received by the Jews, saith St. Augustine, (lib. 18, De Civ. Dei, c. 36,) they are received by the church: who, in settling her canon of the scriptures, chose rather to be directed by the tradition she had received from the apostles of Christ, than by that of the scribes and Pharisees. And as the church has declared these two Books canonical, even in two general councils, viz., Florence and Trent, there can be no doubt of their authenticity. (Summary and annotations by Bishop Richard Challoner A.D. 1749-1752) (5 hr 50 min)