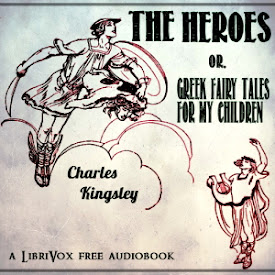 The Heroes; Or, Greek Fairy Tales for my Children

This is Kingsley's masterful retelling of the Greek stories about their Heroes and in a manner suitable for children. "why have I called this book ‘The Heroes’? Because that was the name which the Hellens gave to men who were brave and skilful, and dare do more than other men. At first, I think, that was all it meant: but after a time it came to mean something more; it came to mean men who helped their country; men in those old times, when the country was half-wild, who killed fierce beasts and evil men, and drained swamps, and founded towns, and therefore after they were dead, were honoured, because they had left their country better than they found it. And we call such a man a hero in English to this day, and call it a ‘heroic’ thing to suffer pain and grief, that we may do good to our fellow-men." - Summary by the author and phil chenevert (4 hr 21 min)

Part 1 of Perseus: How Perseus and his Mother came to Seriphos

Part 2 of Perseus: How Perseus vowed a rash Vow

Part 3 of Perseus: How Perseus slew the Gorgon

Part 4 of Perseus: How Perseus came to the Æthiops

Part 1 of the Argonauts: How the Centaur trained the Heroes on Pelion

Part 2 of the Argonauts: How Jason lost his Sandal in Anauros

Part 3 of the Argonauts: How they built the ship ‘Argo’ in Iolcos

Part 6 of the Argonauts: What was the end of the Heroes

Part 1 of Theseus: How Theseus lifted the Stone

Part 2 of Theseus: How Theseus slew the Devourers of Men

Part 3 of Theseus: How Theseus slew the Minotaur

Part 4 of Theseus: How Theseus fell by his Pride