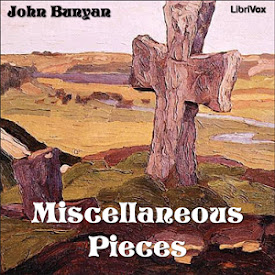 John Bunyan (November 28, 1628 – August 31, 1688), a Christian writer and preacher, was born at Harrowden (one mile south-east of Bedford), in the Parish of Elstow, England. He wrote The Pilgrim's Progress, arguably the most famous published Christian allegory. In the Church of England he is remembered with a Lesser Festival on 30 August.

Bunyan became a popular preacher as well as a prolific author, though most of his works consist of expanded sermons. In theology he was a Puritan, but there was nothing gloomy about him. The portrait his friend Robert White drew, which has often been reproduced, shows the attractiveness of his true character. (Summary from Wikipedia) (0 hr 54 min)

Of the Trinity and a Christian

Of the Law and a Christian

Great book that was read well.