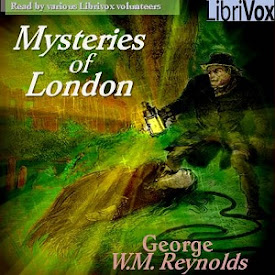 The Mysteries of London Vol. I part 1

The Mysteries of London was a best-selling novel in mid-Victorian England. The first series was published in weekly instalments from 1844-46, priced at a penny each. Serialised novels sold in this way were known as Penny Dreadfuls … without any claim to literary greatness, they sought to provide ongoing entertainment for the popular audience. This book has it all -- vice, poverty, wealth, virtue, in every combination. Consider it a Victorian soap opera.
Summary by Cori Samuel.

The Old House in Smithfield

The Mysteries of the Old House

The Beginning of Misfortunes

A Den of Horrors

The Old House in Smithfield's Again

The Republican and the Resurrexction Man

The 26th of November

Another Day at the Old Bailey

The Lapse of Two Years

The Speculation. An Unwelcome Meeting

The Bed of Sickness

The Road to Ruin

The Boozing Ken Once More

The Wrongs and Crimes of the Poor

The Result of Markham's Enterprise

A must listen! C Samuel graces first dozen or so chapters

Half way through but already This novel made up of regular serials gives one so much: drama, vice, altruism, goodness, charity, intrigue, greed, violent crime, peace, mystery, surprise!, horrors, cruelty, suicide, interventions of rescue, the despicable wealth divide of the wealthy vs the working class and poor, and so on. There are so many surprises and covers so much ground regarding Victorian human nature, it ranks as one of the best novels, at least that i have ever read or heard. But also one of the best 19th century revelations of the immoratlity, corruption of that time's 1% and legal system; and how that greed, inter alia can only make the poor wretch take out their misery on each other("the pecking order)and/or violent crime on one another and the wealthy. It seems likely that George W. M. Reynolds took some devices from Dickens but I think not plagarism. Unlike Dickens, George W. M. Reynolds also a writer, went a step further by being a political activist and took his and many others revulsion toward's Victorian England's exploitation and harsh treatment of "we the people"(american term for the majority:lower middle class and worse off) through pamplets for social reform, protests in the street and to parliament(e.g.Chartist movement). Charles Dickens I think was over optimistic about charity. And charity is a very difficult almost impossible way to bring the lower classes up, the suffering tended to equally across a whole nation and effectively curb the greed and exploitation spawned by upper classes. It is not so much to blame individuals but a systemic villainy. In the early 20th century Liberal Prime Minister Herbert Asquith and two decades later Sir William Beveridge came up with the most effective idea: the welfare state. It is outrageous how beggining with the US Reagan and UK Thatcher("there's no such thing as society)that currently that both US and UK are regressing back towards to this abominable social period of the 19th century. Many of the gains due to the idea of the welfare state are being cut back, especially under the leadership of arrogant posh boy David Cameron and the sell out, reneging on all his promises for an FDR new deal President Obama. It is telling that charities are one of most outspoken against neoliberal or neoclassical live and let die economics which prevails today. Charities are the first to say they cannot handle the exponential increase of those in need due to this anti-humanity financial and economic system that is inflicted upon the US, Great Britain, and across the world wonderfully read especially by the incomparable Cori Samuel. Thank you Cori and to all the readers at Librivox and Internet Archive for the giving of your time and effort unselfishly for the benefit of many of us who can't afford audio-books for entertainment and knowledge and/or can't read very well for various reason. note:track 52, "chapter" 51 apologies for my ramble. will try to edit later.

Really enjoyable. Crazy that, in a lot of ways, not much has changed (e.g. horse meat). Love all the twists and turns and connections of characters. A couple of the narrators were a little difficult to understand or didn't read some words and names quite right, but some were truly magnificent. Also I found in some parts that it went on a bit, but other parts I was gripped. All in all I can't wait for part 2.

It is incredible to think that this was literature for the masses. It is a bit less intricate than Dickens, but that makes it better for listening. Most readers are brilliant.

Quite good even better than mysteries of Paris

fascinating story. like a Dickens but without the noble poor people. These characters seem more real in their thoughts and feelings.