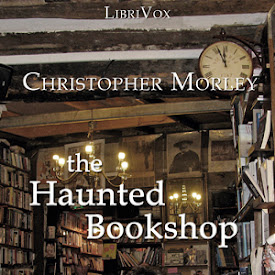 Roger Mifflin is the somewhat eccentric proprietor of The Haunted Bookshop, a second-hand bookstore in Brooklyn that is "haunted by the ghosts of all great literature." Beginning with the arrival of a young advertising man and the mysterious disappearance of a certain volume from the shelves of the bookshop, a lively and often humorous tale of intrigue unfolds, generously sprinkled with liberal doses of Roger's unique philosophy on literature and book selling. (Summary by J. M. Smallheer) (5 hr 34 min)

Aubrey Goes to the Movies, and Wishes He Knew More German

Again the Narrative is Retarded

Aubrey Determines to Give Service that isDifferent

The Battle of Ludlow Street

Fun story for the most part except for the one sad occurrence near the end. Won't say what it is, to keep the suspense for other listeners. J. M. Smallheer's reading makes it very amenable and worth listening to. Thank you.

Excellently written and very witty. Does mention a lot of other books from that era, but could be interesting to check them out also? Very enjoyable, if taken as a light hearted mystery with a very appealing and eccentric character, as the funny one to the rather staider/straighter character of the young stalker :)

A must for the book lover! Excellent reading of a fun yarn. The best vindication of the importance and significance of the printed word I ever heard. So valuable in today's digital age. Well worth your time.

Brilliant absolutely brilliant. So well read the reader does a great job with giving the characters voices one of the greatest readings I've heard

It was enjoyable and for the period from which it was composed, I can overlook the faults that some reviewers have mentioned.

It's about the books

I agree more with Xbeza than Doinker. It's a fun read just because of the commentary on the books - the plot seems secondary, although it's nice to spend the second half chasing around after German plotters. J.M. Smallheer does an excellent job of reading - even the long passages where Roger discourses about good (and bad) literature are full of life and interest. But you can decide for yourself (with a bit of help from the author). Here's the introduction (from the Project Gutenberg Ebook): "TO THE BOOKSELLERS Be pleased to know, most worthy, that this little book is dedicated to you in affection and respect. The faults of the composition are plain to you all. I begin merely in the hope of saying something further of the adventures of ROGER MIFFLIN, whose exploits in "Parnassus on Wheels" some of you have been kind enough to applaud. But then came Miss Titania Chapman, and my young advertising man fell in love with her, and the two of them rather ran away with the tale. I think I should explain that the passage in Chapter VIII, dealing with the delightful talent of Mr. Sidney Drew, was written before the lamented death of that charming artist. But as it was a sincere tribute, sincerely meant, I have seen no reason for removing it. . . . Now that Roger is to have ten Parnassuses on the road, I am emboldened to think that some of you may encounter them on their travels. And if you do, I hope you will find that these new errants of the Parnassus on Wheels Corporation are living up to the ancient and honourable traditions of our noble profession. CHRISTOPHER MORLEY. Philadelphia, April 28, 1919"

This is a rather long-winded story that takes over half the read to(slowly)kick into gear. It's also very heavy-handed, which may not have been a problem when it was written, but certainly is now. What is of interest are the scores of other actual books mentioned along the way. The listener is actually drawn to them more than the story at hand. The timing of this novel is set and was written right before the Versailles accord of 1919, which set the wheels of Nazi Germany into motion. Morley treats the residents of his book more like chess pieces than like human beings. Rather than endowing them with grand speeches and long soliloquies about other authors, it would have been nice had the characterization and story background been flushed out a bit more. We never really learn much about the characters in this book - the protagonists and villains seem cut out of a single piece of cardboard. They say or do their piece, then they go away. Still, if you have many hours to while away, it's an okay way to pass the time.

You must be a lover of books, in general, to love this book, in particular.

This book has a plot on which the author hangs his erudition about other great books. You need to go into this willing to be pleased as he gives shout-outs to various obscure books, which were obscure enough at the time of writing that he wanted to give them a bit of a prod along in the public conciousness. You need to love the sort of weirdoes that hang out in the book trade. You need to accept that the author is a bit of a pervert in his treatment of his young heroine (he describes how you'd stalk her on the street so that you could stare at her, which a lot of the male characters seem to do, driven by almost magnetc forces beyond their control.) If you can move past all that, it's a really pleasant listen, and the read of it is just excellent. Its one of the best LV books I've listened to, although I work with books, so, perhaps I'm its core audience.