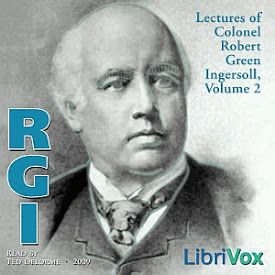 A second volume of lectures by the most famous orator of the 19th century. Ingersoll was a tireless crusader for the dignity of humanity, and a relentless opponent of organized religion. (Summary by Ted Delorme) (16 hr 47 min)

15 - Review of His Reviewers

Once again, I wanted to say what a great job Ted does on both part one and two. In my mind, he IS Colonel Ingersoll. I associate Mr. Delorme's voice with Ingersoll himself because he does such a passionate, masterful job that I'm convinced I'm hearing what Ingersoll MUST'VE sounded like! I can tell you put a lot of work and love into this project and I thank you very much. I can also tell you that you've provided far more enjoyment than you can imagine and that your work was well worth it.

The Way Ingersoll Was Meant To Be Heard!

Robert Green Ingersoll was an electrifying orator, and his works were meant to be heard. In his day, no other human being had been seen and heard by more Americans - or would be until the advent of motion pictures, radio, and television. After hearing Ingersoll speak, Samuel Clemens wrote: "What an organ is human speech when it is employed by a master!" Ted Delorme doesn't simply read Ingersoll's speeches, but he masterfully performs them. Ted brings Ingersoll's assertiveness and wit to life in these nicely produced recordings. Listening to Ted Delorme's performance, it easy to understand why Robert Ingersoll was beloved by so many of his contemporaries such as Samuel Clemens, Walt Whitman, Ulysses S. Grant, Andrew Carnegie, Thomas Edison, and President James Garfield. Between 1865 and 1899, Ingersoll crisscrossed America on more than a dozen speaking tours. He packed the largest theaters of the day at the then-substantial admission of $1 apiece. Thanks to LibriVox and Ted Delorme, everyone can now hear and experience the speeches of Robert Ingersoll without a ticket.

Great Narration ! The quality and timbre of the readers voice is such that it takes you back to the time of Ingersoll and makes you believe that this is what the gentleman sounded like. I cant explain it, so listen for yourself and you too will be convinced that this book could not have had a better reader. His exasperation with the religious, his hope that others will abandon said cults comes through in every word, every inflection. It's as if the reader FEELS the way Ingersoll felt, like he was channelling him. The book in itself is amazing, one of modern societies first attempts to topple religion from its throne, with wit, reason and truth, it hits home deeply.

Well performed. Ingersoll is, however, misguided on the fundamental nature of religion. Ingersoll failed to realize that religion is a fundamentally darwinian means of collectivising peoples into tribes to better survive. Religion serves humanity and provides a fundamental darwinian need. Somehow, this idealistic believer in Darwin never realized this and nobody ever told him. Strange. Ingersoll should have stuck to making pnuematic shop tools as opposed to joining the tribe of atheistic darwinian mirmadons

Amazing,both the author and the narrator