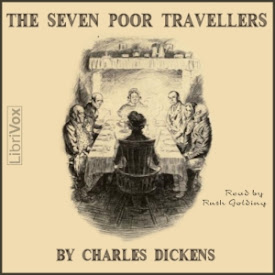 One of Dickens' Christmas stories, this was first published as part of the Christmas number of Household Words for 1854. The first chapter relates Dickens' visit to the ancient Richard Watts's Charity at Rochester. The second chapter is the touching story of "Richard Doubledick", which Dickens supposedly told the travellers, and Dickens' journey home on Christmas morning provides the short concluding chapter. (Summary by Ruth Golding) (1 hr 11 min)

Ruth Golding reads this pleasing and lesser know Dickens story with her unshakeable prowess. She is indeed a first class reader and I find myself scouring Librivox for further works she has brought to life.

I echo everything my fellow listeners have written. A lovely little story, beautifully read. Thank you librivox.

"The Seven Poor Travellers" (1854) is a short Christmas story co-written by Charles Dickens and Wilkie Collins. It is based on a real place in England called <a href="http://en.wikipedia.org/wiki/Richard_Watts#Six_Poor_Travellers_House" rel="nofollow">Six Poor Travellers House</a> (Dickens is the 7th traveller of the story title). Part 1 is the opening frame story, part 2 is a story-within and part 3 the conclusion of the frame. I can't be sure but it seems Dickens wrote most or all of part 1&3 (the frame) while Collins probably wrote the story of Richard Doubledick (wonderful name). I found part 1&3 to be enchanting and part 2 of little appeal. Ruth Golding gives a professional level reading which adds to the stories atmosphere. If for no other reason than learning about the Six Poor Travellers House part 1&3 are well worth the listen, but if your a poor traveller for time, don't feel too guilty about skipping the main course IMO.

Engaging tale of redemption and forgiveness that I hadn’t heard before. The reader is excellent. Her pace is slower than other readers that I’ve listened to, and perfectly suited to the pace of the tale, allowing the listener to slip in to its rhythm and enjoy the telling thoroughly. Thank you!

This story's only connection to Christmas is that the main story is set up as a narration told on Christmas eve. The main story itself is a classic Dickens' morality tale, and charming enough if you are a Dickens fan. Ruth Golding, as ever, is a superlative narrator.

Re the Six Poor Travellers

You may also be interested in journalist Henry Lucy's experiences at Watts's some years after Dickens' visit there. See Chapter 9 <i>Christmas Eve at Watts's</i> in <a href="http://www.archive.org/details/faces_places_rg_librivox" rel="nofollow">Faces and Places</a>.

This is one of many Christmas stories written by Dickens, yet due to its lack of continuity I found it very disappointing.