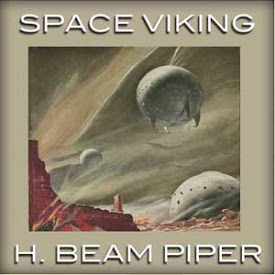 A galactic war has left the Terran Federation in ruins. Formerly civilized planets have decivilized into barbarism. Space Vikings roam the wreckage, plundering and killing for gain. Lord Lucas Trask of Traskon was no admirer of the Space Vikings, but when murder takes his wife on his wedding day, Trask trades everything he has for his own Space Viking ship and sets out on a galaxy-wide quest for revenge. (Summary by Mark Nelson) (7 hr 37 min)

Book was really good and enjoyed the person reading it only complaint is that it ended too early I mean great ending to the story being told, but was so wrapped up in all the characters that I wanted to know what happened to everyone after the story was over. Book let me with allot of questions at the end.

I absolutely Love this book! The story is a great tale of adventure and search for vengeance. As always expertly read by Mark Nelson who in my opinion is the best narrator around!

I really enjoyed this book. It has interesting views on democracy and feudalism. Piper wrote a great book with memorable characters and a fun storyline. I was hooked all the way through. My only complaint is that this wasn't a huge series like Star Trek. I'd love to see how things turn out. Also, Mark did a great job reading this book. His tone was not as monotonous as the other reviews would leave you to believe. He makes this story even better.

So many names of people, ships, and worlds. A bit hard to keep track of all the plot points and action. Not much development of character. The story just plodded along until the merciful end. I generally like the writer but this story had an interesting concept but lacked anything that would endear it to the reader. Great to listen to when trying to fall asleep.

Overall the reading was excellent, and I have no complaints as to pronunciation or tone. The story is interesting, and a joy to listen to, despite a few instances of slow progress and seemingly lack of direction. Well done and thanks for contributing.

Decent and not a waste of time

Decent book. Slightly aimless and uneventful towards the middle of the book, but has a satisfying ending. I see a lot of Isaac Asimov in H. Beam Piper's stories, and I can't get enough of Asimov.

The story is good, a little hard to follow at times. The good guy isn't so good. The book is expertly read, top notch.