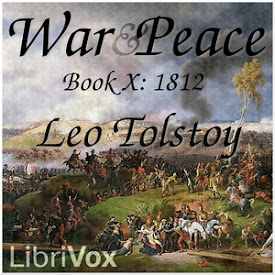 War and Peace offered a new kind of fiction, with a great many characters caught up in a plot that covered nothing less than the grand subjects indicated by the title, combined with the equally large topics of youth, age and marriage. While today it is considered a novel, it broke so many novelistic conventions of its day that many critics of Tolstoy’s time did not consider it as such. Tolstoy himself considered Anna Karenina (1878) to be his first attempt at a novel in the European sense. (Summary by Wikipedia) (7 hr 29 min)

Five readers alternate through the chapters, and they have different accents. One sounds Russian, one Asian, one from Nova Scotia, and two from United States. All are understandable, but names are pronounced differently, sometimes making it difficult to follow the story.

Great readers. The Battles of Smolensk and of Borodino

With a few exceptions the readers were terrible.

chapter 25 is very difficult to understand.