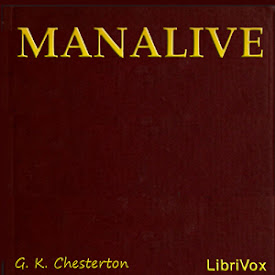 The flying blast struck London just where it scales the northern heights, terrace above terrace, as precipitous as Edinburgh. It was round about this place that some poet, probably drunk, looked up astonished at all those streets gone skywards, and (thinking vaguely of glaciers and roped mountaineers) gave it the name of Swiss Cottage, which it has never been able to shake off. At some stage of those heights a terrace of tall gray houses, mostly empty and almost as desolate as the Grampians, curved round at the western end, so that the last building, a boarding establishment called "Beacon House," offered abruptly to the sunset its high, narrow and towering termination, like the prow of some deserted ship. (Summary by Gilbert Keith Chesterton) (6 hr 12 min)

This is a hard book to review. It seems to me to be a bit of a personal pleasure project for Chesterton. Maybe published when he was so famous they'd publish anything of his, whether they liked or understood it or not. The scenery descriptions are lengthy and are at times almost nonsensically poetic. This is certainly a source of pleasure for Chesterton- you can feel his enjoyment as you read them, even as you wonder a bit at why so much time and space is given over to background scenery. The Madcap Character is introduced to the boarding house. He institutes strange rituals. He says outlandish things. He is Puck. Everyone else begins to say and do madcap things. I began to feel that the Madcap Character was pulling their legs. Then I began to feel that several characters were pulling each others' legs. Then I began to feel the author was pulling my leg, perhaps even mocking me for reading all this nonsense and trying to make sense of it. It seems to teeter from earnest discourse to "just kidding, it's all hogwash" and back again. And back again. Is this a philosophical treatise? Nonsensical frippery? A drunken tirade? I still can't tell. But it's different than the norm, I'll say that for it. I'm tempted to give it an extra star because I feel like the author successfully pulled something over on me, and I can respect that. I'm just not sure what.

The end of almost every chapter seems to be missing one or more clauses. I am unable to tell, without the text in front of me, whether this is because the narrator has missed text, his narration been cut short, or his manner of inflection fails to denote clausal punctuation.

Incredible as always. G. K. Chesterton! You’ve managed to complete yet another mind-numbingly confusing hunk of awesome! The descriptions are very, very long in places, so hopefully you’re the patient type! Best for ages 13+

A slow narration that made no sense at the beginning of the story but gradually all my questions where answered And had a satisfactory ending.

Filled with white privilege. Lacks sufficient diversity, equity, and inclusion. Also no LGBTQTIAWSAM+- characters. This is an unforgivable mortal sin.

a great, bizarre and lively modern fairy tale. I recommend you read it while listening to capture the lyricism.

pretty good narration. there are extra divisions beyond those of the text itself that I found unnecessary

To truly be alive!

What an absolutely wonderful adventure! How innocent, the seemingly wild man Innocent Smith?