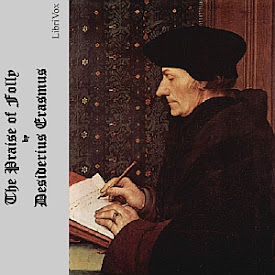 The Praise of Folly

The Praise of Folly (Greek title: Morias Enkomion (Μωρίας Εγκώμιον), Latin: Stultitiae Laus, sometimes translated as In Praise of Folly, Dutch title: Lof der Zotheid) is a satirical essay written in 1509 by Desiderius Erasmus of Rotterdam (1466/69-1536). It is considered one of the most influential works of literature in Western civilization and one of the catalysts of the Protestant Reformation.

It starts off with a satirical learned encomium after the manner of the Greek satirist Lucian, a piece of virtuoso foolery; it then takes a darker tone in a series of orations, as Folly praises self-deception and madness and moves to a satirical examination of pious but superstitious abuses of Catholic doctrine and corrupt practices in parts of the Roman Catholic Church—to which Erasmus was ever faithful—and the folly of pedants (including Erasmus himself). Erasmus had recently returned, disappointed, from Rome, where he had turned down offers of advancement in the curia, and Folly increasingly takes on Erasmus' own chastising voice. The essay ends with a straightforward statement of Christian ideals.

The essay was hugely popular, to Erasmus' astonishment and sometimes his dismay. Before Erasmus' death it had already passed into numerous editions and had been translated into French and German. An English edition soon followed. It influenced teaching of rhetoric during the later sixteenth century. It was put on the Index of forbidden books by the Council in Trent in 1559. (Summary adapted from Wikipedia) (3 hr 42 min)

Being a Christian I must say I do love Erasmus' mind. In Praise of Folly he delves into a satire on pride vs foolishness. It's really brilliant. Foolishness is here looked upon by the author in contrast to pride. How necessary it is to have godly foolishness, like that of a child. He seems to be at a point in life where he is sick of the erudite, intellectual, self-proclaimed brilliant minds of his day and tries to show how foolish they are for discounting foolishness when before God. He tells us the word fool in Greek the same as little child thus necessary in our approach to be approach the Master. Thats the meat I got out of it. Great read!

This work provides a wonderful social critique of many components of society at the time and necessarily the practices of what was then, simply, Christianity. The recording is clear, well timed, and appropriately pronounced.

Very hard to get into this book, both the narrative and the narration, sorry. I have up half way through.