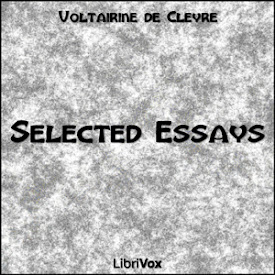 Voltairine de Cleyre (1866–1912) was, according to Emma Goldman, "the most gifted and brilliant anarchist woman America ever produced." Today she is not widely known as a consequence of her short life. De Cleyre was especially influenced by Thomas Paine, Mary Wollstonecraft and Clarence Darrow. After the hanging of the Haymarket protesters in 1887, she became an anarchist. "Till then I believed in the essential justice of the American law of trial by jury," she wrote in an autobiographical essay, "After that I never could." She was known as an excellent speaker and writer – in the opinion of biographer Paul Avrich, she was "a greater literary talent than any other American anarchist" – and as a tireless advocate for the anarchist cause, whose "religious zeal," according to Goldman, "stamped everything she did." (Wikipedia) (12 hr 27 min)

The Making of an Anarchist

In Defense of Emma Goldman

Literature the Mirror of Man

The Drama of the Nineteenth Century, part 1

The Drama of the Nineteenth Century, part 2

They Who Marry Do Ill

The Economic Tendency of Freethought

A brilliant writer of whom I had not previously been aware.

Thank you Librivox for presenting wonderful works read by lovely, international, volunteer readers! Misses Voltairine had presently escaped my awareness, so I thank this fine website for providing me not only of this knowledge but her brilliant work to be instantly available and free of cost! Oh, as an older man I often believe that since Reagan (more like Nixon!) life has become gradually and ceaselessly worse and devoid of joy, opportunity, and rationality. However, Librivox has been a wonderful treat and a gift of hope that humanity and truth will out! Thanks so very much, Librivox! I will shout your virtues from the tallest rooftops!