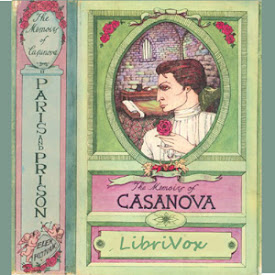 The Memoirs of Jacques Casanova Vol. 2

Giacomo Casanova (April 2, 1725 in Venice – June 4, 1798, in Dux, Bohemia, now Duchcov, Czech Republic) was a famous Venetian adventurer, writer, and womanizer. He used charm, guile, threats, intimidation, and aggression, when necessary, to conquer women, sometimes leaving behind children or debt. In his autobiography Histoire de ma vie (Story of My Life), regarded as one of the most authentic sources of the customs and norms of European social life during the 18th century, he mentions 122 women with whom he had sex.

Although he is often associated with Don Juan because both seduced many women, Casanova is in fact very different from his fictitious counterpart. While Don Juan is a legend, Casanova is a historical character. (Summary from Wikipedia) (21 hr 7 min)

pitch pace & pausing readers! just because u can read fast doesnt mean u should rush through reading without proper pausing or fluctuation n your voice. some really great sounding voices ruined by how annoyingly fast they read, rushing through the details. this should have been the most enjoyable one n the series because of the prison break, but the whole thing was only subpar due to reading style. & they last few chapters were just agonizing because of the style of reading & boring subjects covered by the writer in those chapters.

The memoirs of Jacques Casanova Vol. 2

book is good, as are most of the readers. A few were challenging, like the last reader. I got totally lost with his reading as no pauses or differentiation between characters. Mispronounced many words. Good idea to read it to yourself first and understanding it before you try and read it out loud. Casanova was imprisoned in the Leads, pronounced "LEDs". It tells you this in the text. it was called the Leads because it was under the lead roof.

Good readings except for the last couple of chapters where the reader struggled with the French names and could not even pronounce âAbbeâ correctly! What a shame!