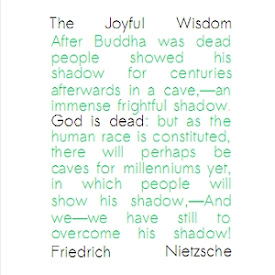 The Joyful Wisdom (or: The Gay Science)

"The Joyful Wisdom," written in 1882, just before "Zarathustra," is rightly judged to be one of Nietzsche's best books. Here the essentially grave and masculine face of the poet-philosopher is seen to light up and suddenly break into a delightful smile. The warmth and kindness that beam from his features will astonish those hasty psychologists who have never divined that behind the destroyer is the creator, and behind the blasphemer the lover of life. In the retrospective valuation of his work which appears in "Ecce Homo" the author himself observes with truth that the fourth book, "Sanctus Januarius," deserves especial attention: "The whole book is a gift from the Saint, and the introductory verses express my gratitude for the most wonderful month of January that I have ever spent." Book fifth "We Fearless Ones," the Appendix "Songs of Prince Free-as-a-Bird," and the Preface, were added to the second edition in 1887. (Summary by Dr Oscar Levy) (12 hr 38 min)

Jest, Ruse and Revenge: A Prelude in Rhyme

Book Fifth: We Fearless Ones, Part 1

Book Fifth: We Fearless Ones, Part 2

Book Fifth: We Fearless Ones, Part 3

When I first started Nietzsche in my philosophy studies I was a bit overwhelmed with his ideas and had a difficult time following him. Now, however, after becoming acquainted with many of the other philosophers he is a breath of fresh air. His use of poetry and deep insights into human psychology sets him apart, he doesn't seem to try to force anything to fit his philosophy (imo) rather he is quite the opposite in his reasonings. Not that he is never wrong, but he seems to not even care whereas many philosphers fight tooth and nail for their philosophies that are based on quite shaky ideas that they hold as absolute Truth.

I have read or listened to all of Nietzsche's books. This one isn't the best. but all of his work is brilliant. I even found an Oxford Lecture right here on Librivox On Nietzsche... Great bonus.

McElroy Can You Help Me Be Less Obsessive Over You

nearest MAC were can you help me the last of the stuff over you?

I am doing a kickstarter for a new audio book: Thus Spoke Zarathustra. Please support and share my project! TimSC https://www.kickstarter.com/projects/1767656987/audiobook-nietzsches-thus-spoke-zarathustra