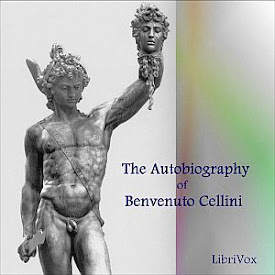 Cellini's autobiographical memoirs, which he began writing in Florence in 1558, give a detailed account of his singular career, as well as his loves, hatreds, passions, and delights, written in an energetic, direct, and racy style. They show a great self-regard and self-assertion, sometimes running into extravagances which are impossible to credit. He even writes in a complacent way of how he contemplated his murders before carrying them out. He writes of his time in Paris:

Parts of his tale recount some extraordinary events and phenomena; such as his stories of conjuring up a legion of devils in the Colosseum, after one of his not innumerous mistresses had been spirited away from him by her mother; of the marvelous halo of light which he found surrounding his head at dawn and twilight after his Roman imprisonment, and his supernatural visions and angelic protection during that adversity; and of his being poisoned on two separate occasions.

The autobiography is a classic, and commonly regarded as one of the most colourful; it is certainly the most important autobiography from the Renaissance.

Cellini's autobiography is one of the books Tom Sawyer mentions as inspiration while freeing Jim in The Adventures of Huckleberry Finn. (Summary adapted from Wikipedia by Karen Merline) (10 hr 14 min)

I learned a lot about Cellini's art, since apparently little of it is available today. I liked hearing his descriptions of what he was working on and the various skills required. It explained how he must have had enemies who saw him as a threat because of his superior abilities in art, but he sometimes further angered his rivals by his response. (It seemed he was provoked by his rivals, first, to be fair). He, on the other hand said many good things about other's abilities and many admirable people both young and old that he knew or worked with. So he did not seem like a braggart to me. He was also a skilled musician, which is what his father wanted him to be. His illnesses, their treatment, his many life-threatening experiences with accidents and violent enemies against whom he had to defend himself, all made it seem miraculous that he survived to old age. His intense emotions made life difficult for him sometimes but suggested he was also well-liked by many who came to his aid. It was fascinating to me to hear about Michelangelo first hand from Cellini who describes an artists' party they both attended. He describes a lot of his interactions with Pope Clement, his patron, who at one point wanted to have him put to death. Then of course he describes the very un Christ-like leaders of the Church who during that time were quite materialistic and status obsessed, seeming to be totally lacking in spirituality and even evil, especially the next pope after Clement who threw Cellini in prison and wanted to have him murdered. I'm hoping there's a vol 2 that will continue the story. There's a fairly long verse section towards the end that I didn't pay much attention to, but I highly recommend the rest. Thank you to the generous and excellent volunteer readers.