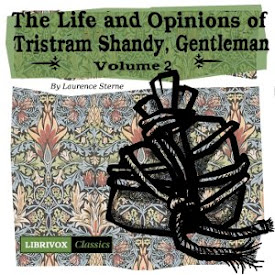 The Life and Opinions of Tristram Shandy, Gentleman Vol. 2

The Life and Opinions of Tristram Shandy, Gentleman (or, more briefly, Tristram Shandy) is a novel by Laurence Sterne. It was published in nine volumes, the first two appearing in 1759, and seven others following over the next 10 years. It was not always held in high esteem by other writers (Samuel Johnson responded that, "Nothing odd can last"), but its bawdy humour was popular with London society, and it has come to be seen as one of the greatest comic novels in English, as well as a forerunner for many modern narrative devices. (Summary from Wikipedia) (5 hr 19 min)

The volunteers did their best to bring this very strange book to life.