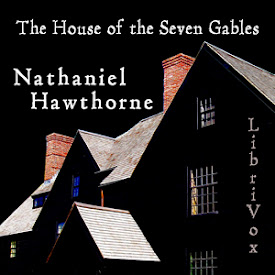 The House of the Seven Gables

"The wrongdoing of one generation lives into the successive ones and... becomes a pure and uncontrollable mischief." Hawthorne's moral for "The House of the Seven Gables," taken from the Preface, accurately presages his story. The full weight of the gloomy mansion of the title seems to sit on the fortunes of the Pyncheon family. An ancestor took advantage of the Salem witch trials to wrest away the land whereon the house would be raised... but the land's owner, about to be executed as a wizard, cursed the Pyncheon family until such time as they should make restitution.

Now, almost two centuries later, the family is in real distress. Hepzibah, an old maid and resident of the house, is forced by advanced poverty to open a shop in a part of the house. Her brother Clifford has just been released from prison after serving a thirty-year sentence for murder, and his mind struggles to maintain any kind of hold on reality. Cousin Judge Jaffrey Pyncheon is making himself odious by threatening to have Clifford committed to an institution. And after all these years, the deed to a vast tract of land, that would settle great wealth on the family, is still missing.

One bright ray of sunshine enters the house when cousin Phoebe arrives for an extended stay to allow unhappy matters in her end of the family to sort themselves out. While she lightens the lives of Hepzibah and Clifford, she also attracts the attention of a mysterious lodger named Holgrave, who has placed himself near the Pyncheon family for reasons that only come clear at the end of the story.

The real crisis arrives when the Judge, who strongly resembles the Colonel Pyncheon who built the house so many years ago, steps up his demands on Hepzibah and Clifford and unwittingly triggers the curse. (Summary by Mark F. Smith) (12 hr 20 min)

Excellent reading of an American Classic

To a modern ear, Hawthorne spends a lot of time getting to the point, but that's part of the enjoyment of this book. If you're looking for action/adventure, look elsewhere. This is a character study of some rather odd, but sympathetic old New Englanders, brightened by a ray of sunshine that is Phoebe and a bit of mystery that is Holgrave. This is an excellent solo recording by Mark Smith. Mark's use of voices helps to keep the characters straight and adds a bit of flavor without distracting from the story.

I am a life-long fan of Hawthorne, and the structure in Salem, Massachusetts called the House of Seven Gables is my favorite historical house to tour. But, alas, this book is only so so. Extremely wordy and seemingly unending -- honestly, it needed a fearless editor, because the heart of the story is good, it is just surrounded by too many superfluous words.

Hawthorne is of a color and gender construction known today to be the cause systemic inequality. Story needs to be rewritten by a more ethnic and Transgendered author. Also story needs to be about how white cis gendered males are keeping LatinX Americans in cages all along the southern border. The original unpardonable sin is that the author chose to be borne white.

I really enjoyed this book, it's slow... so you have to like slow books, I even like it better than the scarlet letter. the reading made it even better. this reader is great, with just enough voice distinctions between characters but not too much.

Great book, but to be honest, it seems like Hawthorne decided to write a book on human character and then added a small plot. It's entertaining, but not my first choice. Has a good ending though.

the house of the seven gables.

Mark Smith knocks it out of the park. his portrayal of Hepzibah is quite memorable. I'll seek out more of his narrations.

Many of the wordy writers of the period made thr reading adrudge; Hawthorne does not suffer from this malady. Mr. Smith's narration always helps.