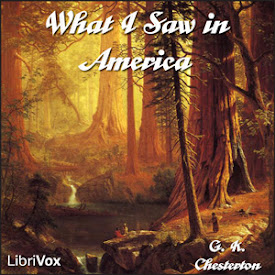 What I Saw in America

“Let me begin my American impressions with two impressions I had before I went to America. One was an incident and the other an idea; and when taken together they illustrate the attitude I mean. The first principle is that nobody should be ashamed of thinking a thing funny because it is foreign; the second is that he should be ashamed of thinking it wrong because it is funny.” (Gilbert Keith Chesterton) (9 hr 54 min)

Chapter 01 Part 1 What is America

Chapter 01 Part 2 What is America

Chapter 03 Part 1 A Meditation in Broadway

Chapter 03 Part 2 A Meditation in Broadway

Chapter 04 Part 1 Irish and Other Interviewers

Chapter 04 Part 2 Irish and Other Interviewers

Chapter 06 Part 1 In the American Country

Chapter 06 Part 2 In the American Country

Chapter 12 The Republican in the Ruins

Chapter 13 Is the Atlantic Narrowing?

Chapter 17 The Spirit of America

Chapter 18 The Spirit of England

Chapter 19 The Future of Democracy

I did enjoy the story of the elevator. I believe most of the criticism stems from his unbelief in Capitalism and the US Constitution. He begins with hotels and it's repetitive model; the billboard lights; describes the waiters as robotic. Those under it's spell are small minded. His hope is this would dissapate as the years go by. Boy, he would be shocked to see that it has spread world wide, though it's not credited to capitalism. America perfect? No. It's way better than what most critics say. When things go wrong, what country is called for help?

If Americans would look at what they have as thoughtfully as Chesterton they might come to appreciate it for the delicate thing that it is and work a little more at protecting it rather than using its freedoms as self-serving license. Great read.

Chesterton writes about the strengths and weaknesses of period American democracy, taking many opportunities along the way to critique capitalism, progressivism, internationalism, and H. G. Wells.

Outside Perspective on America

Chesterton's discussion of what he saw on his trip to America blends his usual wit with his profound insight.

well worth a read

very insightful; one never can see one's own country from the same perspective as an outsider.

Very well read and i renewed appreciation for Mr Chesterson

Best outsider view of America since Democracy in America

Really great narration. Thank you so much!