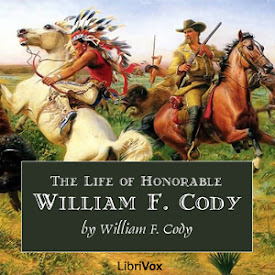 The life and adventures of Honorable William F. Cody--Buffalo Bill--as told by himself, make up a narrative which reads more like romance than reality, and which in many respects will prove a valuable contribution to the records of our Western frontier history. While no literary excellence is claimed for the narrative, it has the greater merit of being truthful, and is verified in such a manner that no one can doubt its veracity. The frequent reference to such military men as Generals Sheridan, Carr, Merritt, Crook, Terry, Colonel Royal, and other officers under whom Mr. Cody served as scout and guide at different times and in various sections of the frontier, during the numerous Indian campaigns of the last ten or twelve years, affords ample proof of his genuineness as a thoroughbred scout. (Summary by the publisher) (8 hr 40 min)

Chapter 8: Adventures on the Overland Road

Chapter 25: Hunting with a Grand Duke

Chapter 30: A Return to the Plains

the reader did a fantastic job. the recording quality and volume were excellent. while this is an autobiography, and while there is a portion at the beginning to state the events are all verifiable and true, i just feel like many of the things in the book were the writer "tooting his own horn". the only positive things i learned about buffalo bill was (1) his families stand on opposing making their state a slave state (though he never speaks of black men in a polite manner or on equal terms) and (2) he was a very savvy business man with his hand in many places making money. the book relates many sad events with indians in the light of the pale face man being a hero. much killing of buffalos for sport (thousands on thousands) and only using the rump & hump for food, skinning them & collecting heads. he relates killing over 69 in a day in a shooting competition and it makes you wonder if they even realized all the meat they were wasting. i recommend reading this to see a different point of view on the old west

A fascinating look into the life and times of frontiersmen. I found it very interesting to have a white mans perspective on events. One feels for both the white men and the Indians who suffered the warring. I agree with the other reviewer about the shocking nature of the number of buffalo killed. There is no sense in the book that there was a limit to the supply then. Buffalo bill is quite a character and it's great to be able to feel as though you're sitting by the fire with him hearing his adventures. I'll probably check out his other book too. Great read. Thank you.

Great story and character. Read like the reader was the author.

A most interesting and informative work, masterfully read. Pay no attention to jaded-grl's comments. She obviously understands nothing of old west doings.