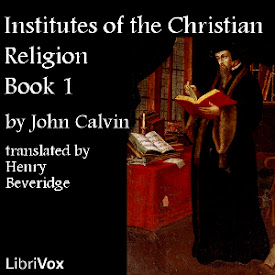 Institutes of the Christian Religion, Book 1

Institutes of the Christian Religion is John Calvin's seminal work on Protestant systematic theology. Highly influential in the Western world and still widely read by theological students today, it was published in Latin in 1536 and in his native French in 1541, with the definitive editions appearing in 1559 (Latin) and in 1560 (French).

The book was written as an introductory textbook on the Protestant faith for those with some learning already and covered a broad range of theological topics from the doctrines of church and sacraments to justification by faith alone and Christian liberty, and it vigorously attacked the teachings of those Calvin considered unorthodox, particularly Roman Catholicism to which Calvin says he had been "strongly devoted" before his conversion to Protestantism. The over-arching theme of the book – and Calvin's greatest theological legacy – is the idea of God's total sovereignty, particularly in salvation and election.

The Institutes are a primary reference for the system of doctrine adopted by the Reformed churches, usually called Calvinism.

Book One of the Institutes treats of the knowledge of God, considered as the Creator, Preserver, and Governor of the world, and of every thing contained in it. (Summary from Wikipedia & preface)

04 - Epistle to Reader and Subject of Present Work

05 - Epistle to Reader and Method and Arrangement

07 - Knowledge of God and of Ourselves Mutually Connected

09 - Knowledge of God Naturally Implanted in the Human Mind

10 - Knowledge of God Stifled or Corrupted

11 - Knowledge of God Conspicuous in Creation

12 - Need of Scripture as a Guide and Teacher

13 - Testimony of the Spirit Necessary

15 - All the Principles of Piety Subverted by Fanatics

17 - Impiety of Attributing a Visible Form to God, pt 1

18 - Impiety of Attributing a Visible Form to God, pt 2

20 - Unity of the Divine Essence in Three Persons, pt 1

21 - Unity of the Divine Essence in Three Persons, pt 2

22 - Unity of the Divine Essence in Three Persons, pt 3

25 - State in which Man Was Created

26 - The World, Created by God, Still Cherished and Protected

29 - The Instrumentality of the Wicked Employed by God

A Classic Work In Theology

It is remarkable that in essentially the first generation of Protestant Reformers something so mature and deep is produced. I am greatly benifiting from this work.

Institution of the Christian Religion,

I enjoyed this book and would recommend it to anyone who loves the word of God. John Calvin certainly supports his views very well with several references scriptural and literal. I enjoyed following along in my bible with the readers.

Excellent exposition! Calvin gives the pious mind deep water in which to exercise and become proficient.

Amazing work; cant believe I can access this for free.

My preference is a single reader rather than multiple readers.

A Beautiful Book To.listen .to