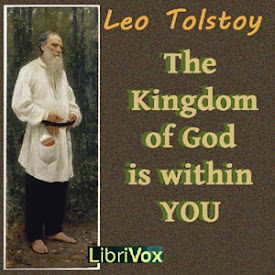 The Kingdom of God is within you

The title of the book comes from Luke 17:21. It is a non-fiction work of the famous Russian author Leo Tolstoy. He wrote it after many years of reflexion on Christianity and Jesus. Many subjects are present such as wars, non-violence, misunderstanding by believers of the faith, etc. (Summary by enko) (13 hr 18 min)

04 - Christianity misunderstood by men of science

05 - Contradiction between our life and our christian conscience

06 - Attitude of men of the present day to war

11 - The christian conception of life has already arisen in our society, and wi…

amazing interpretation of one of the greatest writings

His conceptions of the linearity of progress are contradictory to the way he disregards nearly two centuries of religious tradition in order to rediscover the kernel of truth at it's foundation. That is not to say that this journey is not still worthwhile to go on, however living in a time and place that is no less barbarous now than it was back then makes this precept of linear progress hard to swallow with the rest.

the kingdom of God is within you

the kingdom of God is within you by Leo Tolstoy

Good book, I enjoyed most of it . My guess is Leo had not live long enough to experienced the Russian revolution. Even though he advocated the theory of peacefully civil disobedience as way to obtained freedom and democracy, but history shown his theory is a flawed.

Incredible to imagine it was written 20 years before First World War and christian countries did not read it.

game changer. I just listened to it for second time, it's that good.

Well read. A brilliant book that everyone should hear the message of!

Thanks for the readings

Very good book thanks to all readers.