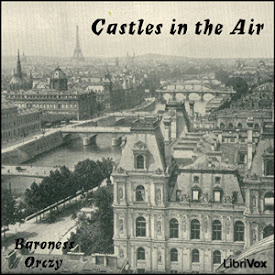 Castles in the Air

Castles in the Air, a short novel or perhaps more like a collection of short stories with memories of a French rogue in the early 19th century Paris, was published in 1921 and about it I quote from the foreword: "In very truth my good friend Ratichon is an unblushing liar, thief, a forger--anything you will; his vanity is past belief, his scruples are non-existent. How he escaped a convict settlement it is difficult to imagine, and hard to realize that he died--presumably some years after the event recorded in the last chapter of his autobiography--a respected member of the community, honoured by that same society which should have raised a punitive hand against him." (Summary by Wikipedia, Lars Rolander and Emma Orczy) (7 hr 44 min)

Chapter I - A Roland for his Oliver Pt 1

Chapter I - A Roland for his Oliver Pt 2

Chapter III - On the Brink Pt 1

Chapter III - On the Brink Pt 2

Another great tale by Baroness Orczy! Lars has a terrific voice for reading. I enjoy listening to him. Ratichon is quite the character rogue who I became quite attached to by the end of the story. His escapades rarely get him anything of what he desires until the end. That is a marriage I would have liked to observe! ha! There is a lot of irony in each story that makes a listener laugh hard when they catch it. Lars reading style and accent could cause you to miss it so listen close now so you too can laugh at or with the lovable rogue!

If the reader puts you off at first use the rabbit icon to speed him up a bit. Don’t miss these hilarious antics. Absolutely worth your time. Much thanks to the reader and his beautiful accent!

Quite an amusing story, and the reader fits the main character splendidly! some of the stories are amusingly predictable, but this adds to the humor!

So miss his voice that I’m listening again to everything I can find that he has read. So in tune with whatever he’s reading.

Loesch can make a dictionary sound exciting. He was such a great reader. But, these a stories are very clever

Interesting stories , very different endings, and GREAT reader, adds so much to the stories.

Excellent pairing of story and reader. I enjoyed it immensely.

fantastic book and narrator! I've listened to it twice.