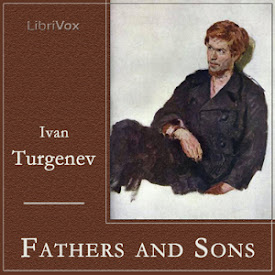 The fathers and children of the novel refers to the growing divide between the two generations of Russians, and the character Yevgeny Bazarov has been referred to as the "first Bolshevik", for his nihilism and rejection of the old order.

Turgenev wrote Fathers and Sons as a response to the growing cultural schism that he saw between liberals of the 1830s/1840s and the growing nihilist movement. Both the nihilists (the "sons") and the 1830s liberals sought Western-based social change in Russia. Additionally, these two modes of thought were contrasted with the conservative Slavophiles, who believed that Russia's path lay in its traditional spirituality.

Fathers and Sons might be regarded as the first wholly modern novel in Russian Literature (Gogol's Dead Souls, another main contender, is sometimes referred to as a poem or epic in prose as in the style of Dante's Divine Comedy). The novel introduces a dual character study, as seen with the gradual breakdown of Bazarov's and Arkady's nihilistic opposition to emotional display, especially in the case of Bazarov's love for Madame Odintsova and Fenichka. This prominent theme of character duality and deep psychological insight would exert an influence on most of the great Russian novels to come, most obviously echoed in the novels of Tolstoy and Dostoevsky.

I had read other well known Russian authors, but not Turgenev. I liked his style very much. He retained a very distinct Russian flavor, but his prose was not as dark or heavy as some writers from the same country; who wrote great masterpieces, but could be quite difficult to read (and well worth the effort). This is one of those books that deserve even more than the allowed five stars. The reader has to take a lot of the credit, since he really contributed to the feeling of continuity and amenity in the story. He did, not unusually, a great job and also deserves more than your allowed five stars. Thank you!

Great reading of a classic.

Thoroughly enjoyed this version. I'd recommend this to anyone.

This is the second book by this author that I have read. It seems to be a typical Russian novel--a fairly good story, but the telling of it is tedious. Basically, it seems that the western mind does not easily identify with the mindset of the Russian author.

I didn't like this so much till the ending which was just so gripping and sad...it (this ending) really did a good job of placing this period Russia in my mind. definitely worth a read; it's short. Rings more of Tolstoy than Dostoevsky for sure.

My first Russian story and it won’t be my last; well read, as always by Roger melin; I decided to start with this because it’s quite short and because of the reviews which are favourable

One of the best books & readings I've heard. Very thought provoking & without undue affectation, perfectly suiting the characters and tenure of the book. Thank you!

A beautiful book. My first by Ivan Turgenev and certainly not the last. The narrator had the right voice for this movement. Thank you🙏

Even if the story was not magnificent, the reading captivated me. Roger is superb and his descriptive reading would make any story seem interesting.