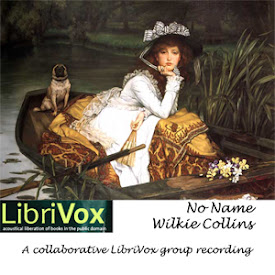 The story begins in 1846, at Combe-Raven in West Somersetshire, the country residence of the happy Vanstone family. When Andrew Vanstone is killed suddenly in an accident and his wife follows shortly thereafter, it is revealed that they were not married at the time of their daughters' births, making their daughters "Nobody's Children" in the eyes of English law and robbing them of their inheritance. Andrew Vanstone's elder brother Michael gleefully takes possession of his brother's fortune, leaving his nieces to make their own way in the world. Norah, the elder sister, accepts her misfortune gracefully, but the headstrong Magdalen is determined to have her revenge. Using her dramatic talent and assisted by wily swindler Captain Wragge, Magdalen plots to regain her rightful inheritance. (Summary adapted from Wikipedia) (29 hr 39 min)

I enjoyed listening to this book and thought the group of readers did a great job. It's a long one but also an interesting study on how we respond to crisis or disappointment, as well as how anger can take one over. It reminded me of a Buddha quote, "Holding onto anger is like drinking poison and waiting for the other person to die." And this story even has a little poison in it... :)

Yes, this is Wen I have a Wilkie's longest stories. But if he had left out one little sentence, One new lines or when little paragraph story would not have been the same. It was an excellent read. If you have read while key before you will love it. If you have never read Wilke you must meet this one! The readers were excellent. It was truly a page turner. At times I had to limit myself because I had other things I had to tend to. The story has so many twists and turns it just keeps you guessing what's going to happen next. I may have to listen to it again because I'm sure I missed things here and there along the way. Highly recommend that you read this book.

Collins once again snatches happiness from tragedy, but he took an inordinately long time to do it. Too much of this long novel was spent in the company of cruddy people such as her cruel uncle, her deranged husband, Captain Wragge, and the housekeeper. The uncle and her husband may be excused for their miserable miserliness, but there is no excuse for the evil soul of that self-serving toady, LeCount. She is the worst of Collins' villains, and he fails to punish her. If this were my first exposure to this author, I might not have continued to the end, so depressing was the long duel between Wragge and LeCount.

I an fairly new to Wilkie Collins and I have not yet listened or read his most famous one ie read women in white or moonstone. This book is rather long but is interesting enough to keep you listening with its twists and turns; Two Of the biggest villains in literature in the captain and Lecount ; oh dear Mrs wragge - maybe Dickens wrote that bit as he helped Collins in his time of illness or addiction ; I almost cried listening to the last two chapters read by Bob nuefeld

Maybe not one of Wilkie's best but it was a lot of fun to listen to anyway! If you know the author you know what you're in for: secrets and sudden deaths and sudden marriages and twists and turns and suspense and all the good stuff, with a great female protagonist of course. Beautifully read!

I with various readers would not choose novels. books with short stories would be better. I wonder if they go back and listen to themselves. I've missed out on many novels due to various readers on one book. I don't read cause I have listened to myself.

Wilkie Collins is a great companion for mindless manual work, and some of these readers are terrific. I enjoyed the chess-like maneuvers between parties, found the Between-the-Scenes letters an interesting structure, and actually busted up out loud at some of Mrs. Wragge's scenes.

Loved this book. Wilkie Collins is quickly becoming one of my new favorite authors, his books not only have the romance element but also, intrigue and suspense. I couldn't wait to find out what happened next.