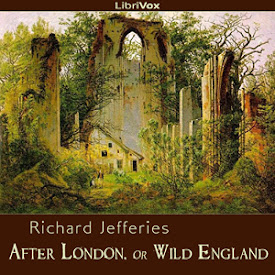 After London, or Wild England

Jefferies' novel can be seen as an early example of "post-apocalyptic fiction." After some sudden and unspecified catastrophe has depopulated England, the countryside reverts to nature, and the few survivors to a quasi-medieval way of life.

The first part of the book, "The Relapse into Barbarism", is the account by some later historian of the fall of civilisation and its consequences, with a loving description of nature reclaiming England. The second part, "Wild England", is an adventure set many years later in the wild landscape and society.

The book is not without its flaws (notably the abrupt and unsatisfying ending) but is redeemed by the quality of the writing, particularly the unnervingly prophetic descriptions of the post-apocalyptic city and countryside. (Summary by Ruth Golding and Wikipedia) (10 hr 6 min)

As beautiful as it can get!

This book is divided into two parts the first of which describes the ecological response to the human abandonment of Britain in the late 19th century. The second is a picturesque travel through the post-apocalyptic landscape. It was written in the 19th-century by Richard Jefferies (1848-1887), an English writer and naturalist. Many thanks to Ruth Golding for her wonderful reading of this novel. In another part of the English-speaking world, they would say: “She’s a hell of a reader”!

MANNNNNNNNNNNNNNNN!!! I was really digging the story and I didn't realize I was in the last chapter and then it just abruptly ended I know this was kind of in fashion of the time based on other stories I've read but still really disappointing-------even so I would highly recommend this book!

awesome with some great ideas

Jeffries' chief strengths as a author were as descriptive writer, and it is no surprise therefore that the most sustained passages in After London are those in the opening part, detailing nature resurgent on the back of some unspecified national catastophe. Elsewhere when the main plot kicks in, some scenes, though well written, lack the necessary forward impetus. The author's strengths again rise to the fore in the two or three great chapters depicting the hero's journey into the black swamp. Some great passages here, depicting an eerie, hellish land both symbolic and real, made more so by the power of the prose, worth the price of admission alone. The ending is too abrupt to be fully satisfying but none the less overall it's a journey worth taking. The reading is excellent, with clear and responsive diction, the steady manner entirely in keeping with the stately prose.

enjoyable to the end which I came upon too quickly. loved the style of writing & the narrator was brilliant. thought she was too slow at first then realised my mind was too quick & impatient. it was like therapy to allow her voice to slow my mind. I am better for it & enjoyed a great fantasy story too. If it came true, for the planet's sake, it might be the best thing for it also... unless humans take heed of these kinds of warnings & change their ways drastically...

This is a remarkable book not just because it must be the first post apocalyptic book ever written, but also because it is beautifully written, both in terms of the language and descriptive skills used. The narrator's voice and cadence was absolutely perfect for this novel. The book does have a sudden end, but I wonder if this might be more due to Richard Jefferies' ill health than to a lack of ideas.

After London, or Wild England..excellent

Possibly one of the most memorable books I've listened to. Listened to it several times now, each time it has captivated my mind and imagination. Big thumbs up to the narrator too, she does and excellent job of making my minds eye travel into the scenes she describes.

The book is of a good quality, though it does begin rather slowly. Ruth Golding does a fantastic job reading and immersing the reader in the world of After London. Overall, a good read, but the reader needs to get to part 2 before thinking of retiring from this novel.