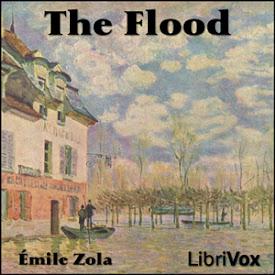 A well-to-do French farm family is destroyed by a flood. The story, thrilling to the very end, is told from the point of view of the family's 70-year-old patriarch. The story speaks of the helplessness of mankind in the face of the forces of nature. (Summary by Karen Merline) (0 hr 51 min)

Of course, Emile Zola, not much more can be said. This small work, impacting and poignant like some of his major ones, grips the mind and soul until the end. The reader, R. S. Steinberg conveyed the pathos of the narrative to perfection. This is one of those offerings from LibriVox which are extraordinary in quality in every way. Five stars seem measly in comparison. I wish to be able to give ten. Thanks.

This story is one of the most powerful and tragic yet beautiful and lovely stories I have ever heard. It is very well written and is read here by my ABSOLUTE favorite LibriVox Volunteer narrator. Take the time to listen for sure.

<br />"The Flood" (aka "L'Inondation") is a short story by Émile Zola published in 1880. It takes place in a rural village on the Garonne River near Toulouse revolving around an actual flooding incident there in 1875. Although not a religious story, it has some biblical imagery, beginning with the stories title. The main character is a 70 year old patriarch who sits down to a Last Supper of sorts with his family of 11 to give thanks for his many blessings. His daughter will soon to be married, and he plans to add another floor to the top of the house for the expanding brood. But after supper, the rains begin, and the nearby river overflows its banks. Like an Ark, the families wooden house provides shelter. But this is no ordinary flood; first the animals, then the servants are swept away, described in the type of realism Zola is renowned for. The family, moving heavenly upwards, eventually take refuge on the roof, watching the refuse of the land swept away and made smooth like the surface of a pond. One tragic incident after the next occurs bringing to mind the Raft of the Medusa, or a feeling like Edvard Munch's painting "The Scream." It reminds me of a 19th century Cormac McCarthy or Flannery O'Connor for its bloodbath. In a few short pages he kills off an entire family of men, women and children in detail. This translation is poor, somewhat stilted, and would greatly benefit from a modern update, but still manages to move in the end. --- R. S. Steinberg's reading is well done. Note: a more recent translation is available by Helen Constantine in the story collection <a href="http://www.librarything.com/work/book/60434840" rel="nofollow"><i>French Tales</i></a> (Oxford UP, 2008). [STB, 12-02-2009, 951]

Realistic story about the power of Nature and the transience of the conditions of live. All is changing constantly, the good things and the bad ones... All is flowing like a quiet river and, sometimes, it becomes a violent flood.

A short but truly moving story of life and death, wealth and loss, hope and despair... It is tragic but portrays well the sudden and unpredictable fate. The reader had a pleasant voice and brought the vivid scenes to life. Thank you, R.S.

what a fortunate times we live in the have these wonderful books bought to life for us by such great readers. thanks for all your efforts and being part of this process

This story has an honesty I was unprepared for and an happy of that fact. The recording is good all around.

This short story moved me to tears nothing more need be said .