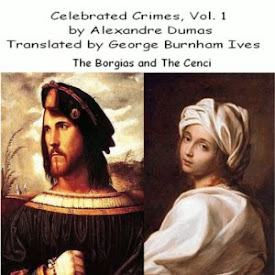 Celebrated Crimes, Vol. 1: The Borgias and The Cenci

Dumas's 'Celebrated Crimes' was not written for children. The novelist has spared no language--has minced no words--to describe the violent scenes of a violent time.

In some instances facts appear distorted out of their true perspective, and in others the author makes unwarranted charges. The careful, mature reader, for whom the books are intended, will recognize, and allow for, this fact. (from publisher's note)

The first volume comprises the annals of the Borgias and the Cenci. The name of the noted and notorious Florentine family has become a synonym for intrigue and violence, and yet the Borgias have not been without stanch defenders in history.

Another famous Italian story is that of the Cenci. The beautiful Beatrice Cenci--celebrated in the painting of Guido, the sixteenth century romance of Guerrazi, and the poetic tragedy of Shelley, not to mention numerous succeeding works inspired by her hapless fate—will always remain a shadowy figure and one of infinite pathos. (from Introduction) (10 hr 16 min)

These families are twisted monsters. It was interesting to hear all of the different versions and compare them to other books and documentaries. Very cool.

It mystifies me why some of these readers took this on. Barry Eads, for example, not only hopelessly mispronounces most of the Italian names, he flubs a lot of English words, such as "draught", which he fails to recognize as the British spelling of "draft," instead pronouncing it as if it rhymed with "naught."

I listened to the second part concerning the Cenci. It's well written, detailed, and intriguing history. Reading is very well done being clearly and evenly spoken. TY Reader.

can't stand unkind comments from people concerning readers. no need to be rude. if you don't like a certain reader, move on..plenty to listen to. or, volunteer yourself.

many words and sentences not read properly