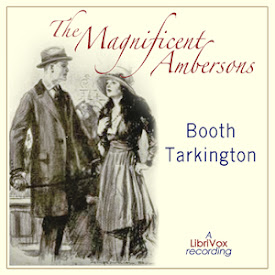 In a world where a gentleman’s life is defined more “by being, rather than by doing,” a family’s reputation can be compromised if it is not guarded carefully, and the sole heir of the Amberson family is proving himself to be a difficult person. Expected by the family to carry on its proud traditions, George Amberson Minafer is trusted implicitly. But though rich relatives provide the elegant suits, the handsome young man who wears them is filled with little but appearances. And this happens in spite of, or perhaps, because of, his mother’s selfless love that places him above her own happiness.

As George’s uncle perceptively remarks, “life and money both behave like loose quicksilver in a nest of cracks.” With the new automobile industry transforming fortunes and coal heat transforming city air into sooty clouds, anything that stands still is apt to be run over, or at least begrimed. claimed 2/24 claimed 2/24 What is magnificent about the Ambersons is their faithful reliance on old money and old ways in a world changing rapidly around them. Or perhaps it is the magnificence of the train-wreck created when George’s relatives, with the best intentions, shield him from the new realities and defer to all his wishes.

Booth Tarkington’s most popular novel, “The Magnificent Ambersons”, will continue to draw readers for its well-crafted portraits of what existed for just a short while – the Midwestern aristocracy. (11 hr 18 min)

The novel starts out well, introducing a family who has made their fortune in building up the commercial and residential sections of their town during the late 1800's. In the first few chapters, Tarkington beautifully sets up a pair of potential romances as well as the seeds of conflict. He then squanders the entire middle part of the book by simply reiterating the characterizations that he so efficiently established at the beginning, while beating the reader over the head with the fact that automobiles have changed the face of America. The changes in society due to new transportation could have been an interesting thesis, but very little happens in these chapters that wouldn't be improved by cutting the length. The story recovers to a satisfying conclusion in the last ten chapters or so, but not before most of my interest was lost. Read the full review at www.freelistens.blogspot.com

good reader and interesting story to the end

This is the first long book I've listened to, in a 3 night span at my job I listened to the whole book and got really into it at the end. I've watched the Orson Welles movie so i had some idea of it but of course the book was much more complete. The final chapter seemed a bit odd as well as Orson Welles movie ending did and also the Hollywood reedit of it which Welles hated. It might have been better for Booth Tarkington to end the book at chapter 34 and have a later book updating George Minifer later in life and whether Lucy Morgan and he got back together etc

I thoroughly enjoyed this novel and was engrossed from start to finish. Chapeau to one of my favourite readers Mark Smith for his sublime narration that truly brought the characters to life. Booth Tarkington exposes a time of great and rapid change at the end of the 1800s that sees some families embrassing the new technological advances whilst others stubbornly resist. The brilliance of this novel lies in its pace. We see the young main character, full of self-belief and a strong dose of entitlement, navigate family relationships and slowly come to terms with the changing world and his place and meaning in it.

A great reading of an American classic

I loved this, from beginning to end. One of the reasons I love Project Gutenberg and Librivox is because these books were written before the advent of television, when people took time to really read of listen to a novel, and to enjoy the language and think about what it said. Today we want instant, unthinking gratification and because of that we miss so much of the best that human creativity has to offer. Tarkington was a brilliant raconteur of the American story, and his characters are the human faces of history. He's also a lot of fun.

What an incredible book! It was informative, descriptive, interesting, amusing, tragic, tear-causing, and a little confusing at the abrupt end. I had to listen to it a few times to get what happened. I wish it had been longer, although it's already pretty long. I listened to it because I had looked up the books that Mark Smith read, and this one sounded good. Mr. Smith is absolutely superb. I'll be looking up his books again and choosing from the list.

To have such command of language and the gift to tell a story with it such as this gem are true "Pearls of great price", and I feel both lucky and honored to be the recipient of them !!! This may be the only full 5 star review I ever give out. This book has raised my total evaluation of all I review higher than its been before by several degrees of magnitude.

Mark Smith us a favorite reader. The book would have been more powerful if it ended in the garden with the ledgen of Lucy as did the movie. It was a read with well defined cast of characters that made it difficult to put down.

Thanks to the reader for his effort to create this excellent version. Another classic book that's recommended by all but read by few. Bravo/brava the LibriVoxateers! TheBookworm (Manchester, UK)