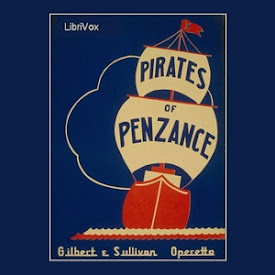 The Pirates of Penzance

The Pirates of Penzance; or, The Slave of Duty is a comic opera in two acts, with music by Arthur Sullivan and libretto by W. S. Gilbert. The story concerns Frederic, who, having completed his 21st year, is released from his apprenticeship to a band of tender-hearted pirates. He meets Mabel, the daughter of Major-General Stanley, and the two young people fall instantly in love. Frederic finds out, however, that he was born on 29 February, and so, technically, he only has a birthday each leap year. His apprenticeship indentures state that he remains apprenticed to the pirates until his 21st birthday, and so he must serve for another 63 years. Bound by his own sense of duty, Frederic's only solace is that Mabel agrees to wait for him faithfully. (Summary from Wikipedia)

Is there anything more British than The P of P? In plot devices that are silly, silly, silly, Pirates makes fun of the sacred cows of 19th century British establishment, as well as the absurdity of its own hero -- and that's why its humour has survived. There's not a weak performer in the entire recording. But my highest praise goes to Mabel sung by high soprano Catherine Eastman. Her "Poor Wandering One" is just brilliant. The staccati high As and that big high E flat were spot on -- well done Catherine! This must have been a massive effort to coordinate. Many thanks to Kristin Hughes and Karen Savage for their (ahem) unsung efforts. If LibriVox isn't the best example of crowdsourcing on the Web... well, I'll eat my hat. TheBookworm (Manchester, UK)

This is probably one of the most AMAZING LV projects I have heard. We are all familiar with the Pirates in some way, having heard excerpts of the 'modern major general' or other pieces, but to hear the wonderful voices of the volunteers doing the entire opera is just WOW! No other way to describe it. Special props to Karen for all her hard work on this project. Thanks!

This is a sung version of this great operetta, and it is better than you might expect from amateurs. The cast obviously enjoyed recording it and we as listeners can hear that. And that makes us enjoy listening to it. The words are spoken (sung) clearly and the music sounds well. A great achievement by Librivox. I hope they know that there are more Gilbert & Sullivan operettas!

This is one of the most interesting recordings I have listened to. It was very entertaining and the singing was very good. I imagine a lot of work went in to this. I would love to see more of these. How about the H.M.S. Pinafore next! Thank you to all the volunteers who worked on this. I Love Bookworm's comments! I love Librivox!

I absolutely love this opera having studied it in school so I was excited to see it here. All the reviews definitely made me listen to it and I’m glad I did! Very good performance for amateurs! I loved it! Awesome job everyone. Definitely listen to this.

It is ok but it really doesn't end. The gentleman who sang Modern Major General did absolutly amazing. I gave it 3 stars mainly because the Librivox volunteers were professional quality. I couldn't believe how good they did!!!! Just WOW!!!!

I'm a big fan of the pirates period . its clear they were having a great time, and it way better then you'd expect. lol listened to the whole thing I did ????????

I wasn't expecting this from an "audiobook" site - a full production, actors & (obviously trained) singers. Now, if they can find a full orchestra for their next production... :-)