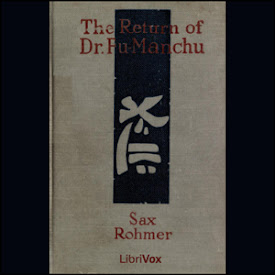 The Return of Dr. Fu-Manchu

Burmese Commisioner Nayland Smith and his faithful friend Dr Petrie continue their fight against the evil genius of Dr Fu-Manchu when they seek to save the good doctor's lost love and protect the British Empire from disaster when their malignant enemy returns to England. (Summary by Elaine Tweddle) (7 hr 28 min)

The Cry of a Nighthawk

Dark Eyes Looked Into Mine

One Day in Rangoon

A Cry on the Moor

Story of the Gables

The Night of the Raid

The Call of the East

My Shadow Lies Upon You

The evil yellow genius has returned to London from China to further his goals of political subversion of the Western order to prepare for the rise of China and the East to world dominance. In truth, he does minimal subverting in this novel. Fu Manchu is mostly pre-occupied here with staying a step ahead of the dogged pursuit of Nayland Smith. These stories are generally disregarded today - discredited as "racist" - as if that would be a reason not to read them. Rather, in addition to the entertaining action and intriguing baroque strategies of the evil genius, we can also get a bonus study of perhaps somewhat unhealthy racial attitudes from the late height of the British empire. Wonderfully read by Elaine Tweddle. She masters an astounding array of accents! Many thanks.

This was my first introduction to Fu Manchu. I have since started a book "Ten Years Beyond Baker Street" where Sherlock Holmes meets Fu Manchu. I found this to be a wonderful audio book. Wonderfully read by Elaine Tweddle. She does a great job with multiple characters! Story: 5 stars Reader: 5 stars Will I listen to again: yes!

The storyline is interesting, I actually found myself thinking things were going in one direction and wound up totally in a different direction. You have to love that type of unpredictability. On top of that, a happy ending! What's not to like about this story? Reader was very good, she did a great job with her voices.

I'm getting better acquainted with Rohmer's work and finding it very entertaining. The reader did an excellent job of bringing the characters "to life", which makes the difference between a good story that's fun to listen to and one that gets rejected after a couple of chapters. Thank you for your hard work!

It's not just any dastardly fiend, it's the malevolent, vitriolic king of creepy, Dr.FuManchu, made all the more vile & detestable by virtue of whom he victimized, the rat! I just love a completely amoral Villain, don't you?

The storyline is very typical, almost predictable many times. but the best part is narration, the reader has done an outstanding job of bringing alive each character. thanks for all the effort

who could expect such a dated and frequently melodramatic story to keep one on the edge of one's seat? but it does. The reader is superb. Im listening to another Fu book next!

I WANT TO SEE CARAMENA

Another enjoyable Fu Manchu novel. The author's style is certainly unusual, but the reader uses it to great advantage. On to the next one.